Memory is elusive. Memory plays tricks on us. Two people recalling the same incident will remember different details. Nailing down a memory in real life is hard, but just try to do it on paper or on a stage.

In her most accomplished effort to date, Tammy Ryan splendidly manages the latter in her memory play, Tar Beach, now receiving its world premiere at Luna Stage in West Orange. The title refers to the Queens, New York, apartment house's tar-covered roof where, during a sweltering summer, the residents go to sunbathe (and, in the evening, to cool off).

The time is 1977. The hottest summer on record. The year that Son of Sam was on the loose, murdering young girls—especially those with long, brown hair. The year of the massive blackout that plunged New York City into Stygian darkness and set off a wave of looting and menace. The summer when something awful—and "irreversible"— happened to Reenie Dolan, a shy 14-year-old middle schooler with a penchant for Greek mythology.

From her very first words, "Pretend this is a dream," Reenie portends something unusual is about to happen, something that becomes a nightmare by the time the lights come down. Cradling her papier maché head of Medusa, Reenie recounts the story of the beautiful young woman who, upon being raped by Poseidon, is turned into a monster with snakes for hair by a jealous Athena. The head creeps out many people, especially her 16-year-old sister Mary Claire, with whom she shares a room, and her doting father Roger, an alcoholic who has just lost his job. Roger is very protective of his daughters in this fear-fraught environment, refusing to let Mary Claire go out with her friend Mary Frances at night unless she takes Reenie with her. Ostensibly, the girls go to a band concert, but when the overloaded electrical grid blows and the lights go out, the two older girls are separated from Reenie, who has gone with the handsome Anthony; when she returns, in the morning, Reenie is a different girl, an injured bird, unable to speak the unspeakable. (Above, L-R: Emily Verla, Emmanuelle Nadeau and Alanna Monte.  Photo Credit Steven Lawler)

Ryan's play benefits from Cheryl Katz's taut direction and amazing performances by the five actors in the cast; that Ryan has provided natural-sounding dialogue that is convincingly spoken to fit character, time and place makes this play all the more riveting. Emmanuelle Nadeau is superb as the dreamy Reenie, just on the cusp of womanhood, shy, anxious for her first kiss and totally innocent. She spends her days in her mother's closet, filled to bursting with family photos, school drawings, handmade Mother's Day gifts and report cards. It is a refuge for her in a house where her parents, both of whom suffer from unfulfilled expectations, battle daily—and loudly. Her portrayal of the Reenie who returns from the night out will take your breath away.

Emily Verla's portrayal of Mary Claire is equally as fine. She alternately cajoles and mocks her little sister, knowing that the only way she will get out of the house (and get up to some teenage mischief) is if she takes Reenie with her. Despite her bravado and big talk, Verla's Mary Claire is still a child; her anguish at her sister's disappearance is palpable. As her friend Mary Frances, Alanna Monte is every parent's nightmare, a girl who seems to have no respect for boundaries and who even fantasizes about catching the Son of Sam and seems unconcerned about Reenie's disappearance. 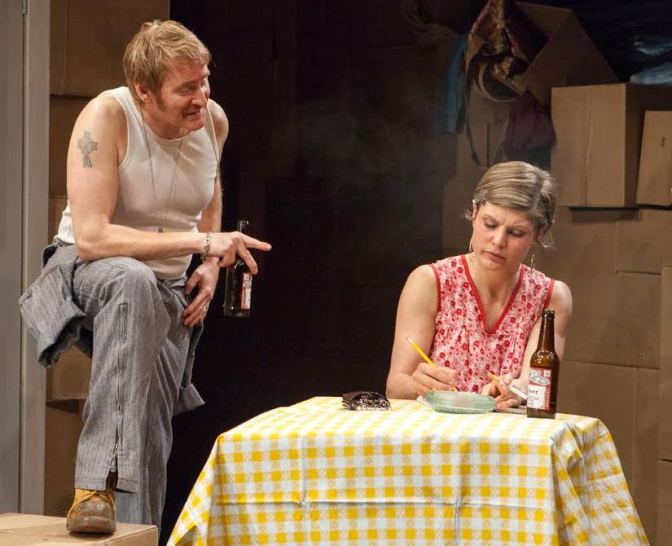 As portrayed by Bart Shatto and Heather Benton, Roger and Brigit Dolan, at first, are rather unlikable people who fling insults at each other in front of their daughters, but they gradually reveal themselves to be two disappointed, lost souls caught in a net that is not their making. When pressed about why she had children, Brigit tells her daughter that it was what one did back then. Shatto is a funny duck when interacting with Reenie; she is clearly the apple of his eye, so that he is especially shattered when she returns home. And Benton's final scene with her younger daughter reveals the bruises inflicted by poor parenting; with no viable role model herself, Brigit is unable to mother her girls the way they should be. In fact, she tells them that they will have to do it themselves. Yet, it is this admission and what follows that opens the door to hope in what, on the surface, appears to be a heartbreaking situation.

Brian Dudkiewicz has assembled 175 cardboard cartons into a set that includes a hidey-hole of a closet, a teenage bedroom, a kitchen and, of course, tar beach. Minimal props mean that we can focus on the characters and events instead of set decor. Oliver Wason has used light (and the lack thereof) to great advantage to capture the scorching temperatures and the cataclysmic breakdown of the overloaded electrical circuits plunging the city into total darkness. And Eric T. Lawson's sound design replicates the city noises, adding to the dream-like quality. And finally, Deborah Caney has dressed the characters in costumes that telegraph their roles very well. There's even an "I Survived Son of Sam" tee shirt!

Proust's Remembrance of Things Past and Harper Lee's To Kill a Mockingbird are two well-known novels of memory; Tammy Ryan's Tar Beach is a worthy example of a memory play. As its final offering of the 2014-2015 season (and the third world premiere they've produced this year along), Luna Stage has once again shown itself to be a vanguard of professional theater. We are lucky to have such a theatrical gem in our area, a theater willing to take chances on new works, thus broadening the play-going public's experience and enjoyment. Bravo!

Tar Beach will be performed through May 9 at Luna Stage, 555 Valley Road, West Orange. For information and tickets, call 973.395.5551 or visit www.lunastage.org  online.