A fascinating, thought-provoking thriller Yankee Tavern by Stephen Dietz and directed by Jeff Knapp has opened at the Barn Theatre in Montville.  No, the play has nothing to do with the New York Yankees. The four-character play is  about conspiracy theories and 'how much we often choose to believe something that may not be true regardless of the evidence...where there is smoke there must be fire reasoning.' The play is set in a shabby bar located in a condemned hotel in Lower Manhattan near Ground Zero (excellent set) in 2006. The owner is Adam (Nick Wolf) a young university grad student in International Studies who inherited the tavern from his father, who may or may not have committed suicide.

Adam is about to be married to Janet (D'Angelique Dopson), who is visiting the bar to complete arrangements for the wedding as the play opens. Enter Ray (Tom Morrissey) a close friend of Adam's father and a master freeloader who describes himself as an “itinerant homesteader.”   He lives in the vacant, rat-infested hotel, along with ghosts including Adam's father.

Ray, obsessed with conspiracy theories, believes what you don't know can hurt you. He has non-mainstream theories on major events such as the JFK assassination, the moon landing (faked?), global warming, and naturally the 9/11 attack. He questions the actions of  the U.S. Government including President Bush, numerology,  Saudi Arabian princes and even  the owner of the World Trade Center.

The trio are joined by Palmer (Alan Van Antwerp) a quiet mysterious stranger  who orders two beers...but only drinks one. The plot thickens when a former female professor asks Adam to come to Washington DC for meetings with a certain secretive agency. Adam assures Janet that he has no close relationship with his former professor. Does he or doesn't he? Who is Palmer? Why is he at the tavern. Why does he order two beers but only drinks one?  Will Adam return? What is the mystery about the jukebox? Can Ray be right about his 9/11 conspiracy theory?

The play is dark, and a wee bit scary, but it has some very funny moments largely provided by Ray and his over-the-top theories. It is crisply directed by Jeff Knapp (yes, the same Jeff Knapp who doubles as one of the most in demand sound designers in the NJ/NY area). 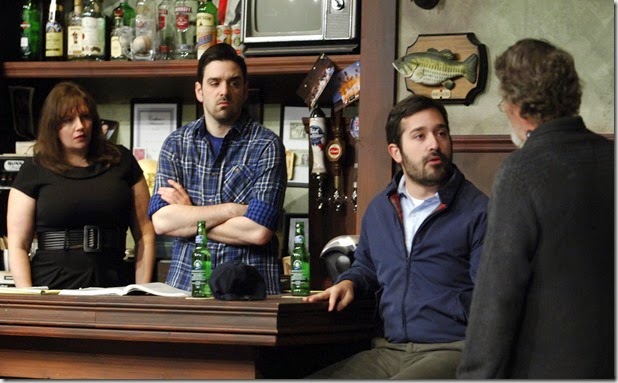 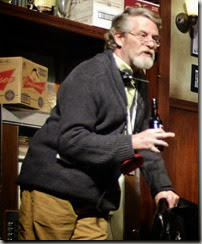 Now, Tom Morrissey as Ray: For the past four years we have each December published our New Jersey Footlights awards. The winners come from both the professional and community stages. Yes, this is only January, but we have already picked one of the 2015 winners. The actor we have selected is Tom Morrissey of Lincoln Park. His performance, particularly in the first act, is at a show stopper pro level. It may be an over used line, but to see his Ray is worth the price of the admission.  You have until February 7th to join the fun as this fine cast  untangles the intriguing events at the Yankee Tavern.

Acknowledgement is also in order for Jeff Knapp's creative staff; Jonathan Wentz is responsible for the impressive set; Lauren M. Grof-Tisza not only is the producer but also the lighting designer; Tommy Pravata covers the light and sound operation; Lauri MacMillan keeps everything together as the stage manager; Mindy Knapp provided the costume design; Claudine Boucher props; and Jessica Phelan the hair and makeup design.

Special note is in order regarding the very effective mood music titled "Bridge Music."  The unique sound was created by Joseph Bertolozzi, a percussion genius, who literally "played" one of the upper Hudson River bridges (you can sample it at www.josephbertolozzi.com).