Every year since the opening in Hackettstown of the Lackland Center for the Arts on the campus of Centenary College, the Centenary Stage Company has hosted a big holiday musical.

This year, the selection of Peter Pan was made months before NBC announced its own production of that same musical. No matter. However appealing it might (or might not) be, to sit in front of the TV and watch an electronic wonder, nothing can beat seeing what seems to be magic, live and on stage.

That sentiment was clearly shared by the large and mostly youthful audience that filled the theater on Sunday of Thanksgiving weekend. The oohs and ahhs came from the adults as well as the children they accompanied. The five-year-old Lackland Center is a state-of-the-art facility and director/choreographer Michael Blevins has pulled out all the stops.

As in past holiday musicals (including Oliver Twist, A Christmas Carol and The Wizard of Oz), the production boasts an enormous cast, including Centenary College theater and dance students, remarkably gifted children from the resident Young Performers’ Workshop (YPW) and professional actors, singers and dancers in the major roles. 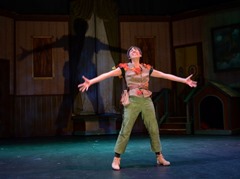 At the center of it all, in the title role, is Lea Antolini-Lid. Following the original Broadway Peter, the legendary Mary Martin, whose performance in 1954 won a Tony Award, Antolini-Lid (right) is a perfect choice. She is, first and foremost, a dancer, and her intuitive sense of body language enables her to convince you that she is an eternal boy. She can sing in a clean and decisive alto. She is a persuasive enough actor to bring a tear to the jaded critic’s eye when, as Peter, she mourns the loss of Wendy. And, to top it all, she can fly!

(Admittedly, the cables supporting the flying actors, Antolini-Lid among them, were occasionally visible, but as an audience member, you must learn to suspend disbelief and enter the moment.)

Matching her in a superb performance as Captain Hook, an arch-villain who somehow has to be funny while threatening to kill people, is Osborn Focht. A veteran of Broadway and regional theaters, Focht has appeared in several Centenary productions. He somehow makes the one-armed pirate, whose nemesis is a ticking crocodile, into a villain that even little kids can tolerate. And he absolutely can sing. [Above: (Center) Osborne Focht as Capt. Hook; (L-R) Chris Kolwicz as Noodler, Brandon Weiner as Smee; Andy Calderone as Boatswain; James Nester as Starkey; Cary Lawson as Cello.]

A third role that is very close to a lead is that of Wendy Darling. With a beautiful singing voice, YPW alumna Nikki Miller, a theater student at Marymount College, is superb in the role.

The J.M. Barrie story about the boy who has chosen not to grow up can be looked at from a lot of points of view. It sort of loads the deck against growing up when the actor who plays Captain Hook is also the pompous and disagreeable father of the family at the center of the story. But that’s an issue for another time.

The show’s original score was by Morris (“Moose”) Charlap, with lyrics by Carolyn Leigh. Songs were added by Jule Styne, with lyrics by Betty Comden and Adolph Green. Among the standouts are Neverland, I Gotta Crow, I Won’t Grow Up and I’m Flying.

This is also a show where dance is central. You can tell, by the fact that the original director/choreographer was Jerome Robbins. Because Centenary has an excellent dance program, Blevins was able to stage some spectacular dance numbers, incorporating more than 20 dancers on the stage at one time.

One may have a slightly uncomfortable feeling about the portrayal of “Indians” but they bring the house down in a percussive number called Ugg-a-Wugg. The leader of the Indians, by the way, is Tiger Lily, beautifully danced by Megan McGill.

And the pirates can dance too. Pirate Song and Hook’s Waltz prove that. A standout among the pirates is Brandon Wiener, a theater student at Monmouth University and an alumnus of YPW, who is very funny as Hook’s sidekick, Smee.

One more performance that impressed me was by 11-year-old Chris Nunez, who did a great job as Michael, the youngest of the children. (Nunez might not be the youngest, but his character is and he was very funny and appealing.)

The production was accompanied by an 8-piece orchestra under the able direction of David Maglione.

This beautiful production of Peter Pan will run at the Lackland Center, 815 Grand Ave., Hackettstown, through Dec. 14. We strongly recommend it. Call 908.979.0900 or visit www.centenarystageco.org for more information.