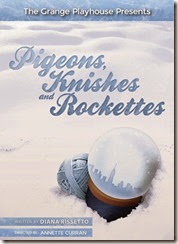 What’s more magical than Christmas in the City and a charming holiday love story and a Valentine to the Big Apple?

Eve Natale (Bonnie Palmer) is insecure, goofy, well-meaning and has just inherited a yarn shop. She instantly falls for Peter Martinelli—an up-and-coming jazz musician (Dan Tessenholtz)—with the most perfect “Christmas voice” (but who doesn’t like Christmas at all.) Georgia (Elizabeth Voss) is Eve’s best friend, a knock-out Rockette ready to be seen as something other than a beautiful face and body, and Cherokee (Ed Shilter) is their usually clueless, model handsome sidekick with a heart of gold. When Peter immediately returns Eve’s interest, she is convinced there must be some kind of magical explanation for his feelings, since she is the girl who never gets the guy. Is is the magic of Christmas—or something else?

Pigeons, Knishes and Rockettes debuted with the 2010 New York International Fringe Festival. Curtain Up said of the show, “In the hands of a writer who has clearly been a student of the great romantic comedies, and lovingly, shrewdly observed the magic of New York, anything is possible” while Linda Buchwald of Pataphysical Science wrote, “those who smile at the thought of Christmas cookies and cry every year during It's a Wonderful Life will be unable to resist the charms of this romantic comedy”.

Curran and Rissetto’s last collaboration, Warmth, which was also a finalist in the 2013 NJ Playwrights Contest, played a sold-out, extended run at the Grange Playhouse in July 2013 and was one of the most successful productions in the theatre’s history. This past May, Warmth was presented as a fundraiser for the Jewish Federation of Southern New Jersey in Cherry Hill, NJ and raised over $25,000 with a one-night only special performance. Rissetto was praised for her quirky and witty humor and unique but sensitive handling of the grave topic of the Holocaust.