THOUGHT-PROVOKING PLAY OPENS IN OCEAN GROVE THIS WEEKEND ONLY 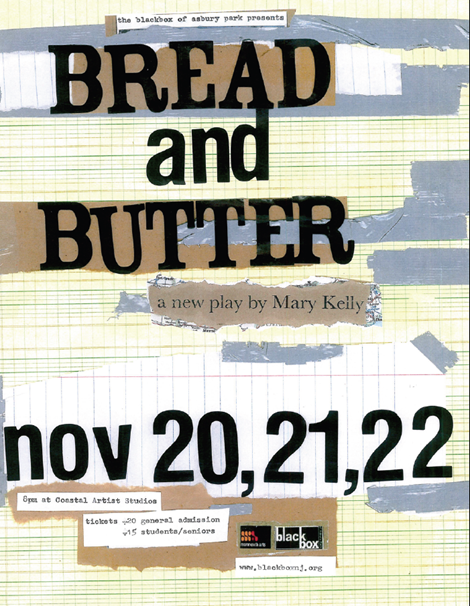 Bread and Butter.  A Situation. takes place in the surreal landscape of postwar destruction and follows two characters, Nick and Anna, as they try to build a home which can protect and hold their illusion of happiness.

Inspired by the dialogue of Pinter, the landscapes of Becket, and the manifestos of Brecht, this play is an attempt to engage the audience with the absurd reality of our war torn planet. Told through humor, horror, imagery and vivid dialogue, Bread and Butter deals with such themes as trauma, war, family and the need for a home.

The story unfolds not just through dialogue, but through imagery, as the playwright has not only written a play, but has also created an instillation for her audience and actors to inhabit.

“I like playing with the idea of what a play is and is not,” says playwright Mary Kelly.  “We get stuck in the rut of plays having to be a certain way.  This play explores and, I hope, explodes those notions.”  Toying with traditional ideas of plot, structure, character, and language, Bread and Butter. does just that.  “Mary has a unique sense of creating plays that pulls together traditional playwriting with performance art and poetry to create visually stunning imagery and provocative stories that challenge our thinking of what plays are,” says Alexis Kozak, Literary Manager of the Black Box of Asbury Park, where Kelly is a Playwright-in-Residence and continues to develop new work.

This beautiful, raw, and poignant play, which won “Most Original Script” at the Venus Theatre Festival in New York City and was a favorite at the Boulder Fringe Festival, is being directed by the playwright.  “Having seen two previous productions, I think I finally understand what this play is about and am ready to bring my own sense of theatricality as a director to the piece.  I have always seen this piece working best in a non-traditional theatre space—a completely bare black box or a warehouse—a space that does not have a stage.  I want this incarnation of the play to focus on the ‘art installation’ of the 10,000 soldiers.  I also want to break down the fourth wall and create a world for the actors and audience to live in together,” she says.