When we first meet 32-year-old Janice at an office Halloween party, she is a tightly wound bundle of nerves, sure she is pre-diabetic, agoraphobic, slipping into insanity and capable of killing people. She talks incessantly, repeats herself often and expresses virulent hatred for her job as a documents scanner. With that opening scene, Tom Matthew Wolfe plunges the Premiere Stages audience into the odd world of Janice Underwater, his quirky play about a woman who thinks she is losing her mind. 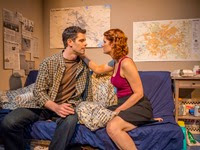 As the plot unfolds, her suspicions don't seem to be unfounded: her mother showed signs of schizophrenia as a teenager, burned down the family house and vanished 20 years before the play begins. Further complicating matters, her father is showing signs of Alzheimer disease, her brother has had several near-death experiences (they give him "clarity," he says) and Paul, the handsome super of her apartment building and a romantic possibility, has his own problems with PTSD after having served in Iraq. And as Janice waits the results of genetic testing that could confirm her worst fears, she has visions of her mentally ill mother who tells her, "Blood is fate." It's a heavy burden for a mentally fragile young woman who struggles pursue her art, pay the rent on a city apartment and hold her life together—all at the same time. (Above: Eddie Boroevich as Paul and Amy Staats; Photos by Mike Peters)

Selected from over 400 submissions of unproduced scripts by area playwrights and the winner of Premiere Stages annual play competition, Janice Underwater has been given a polished, well-acted production at the Zella Fry Theatre on the campus of Kean University in Union, where it runs through September 21.

Jade King Carroll's crisp direction moves what could be a depressing story steadily through 90 minutes without intermission. The story unfolds on a terrific, multi-functional set designed by Caite Hevner Kemp and atmospherically lit by Nadine Charlsen. Janie Bullard's choice of Beethoven's Ninth Symphony highlights the turmoil of Janice's psyche. 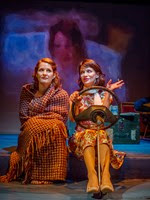 And Carroll's cast really shines, too, with stellar performances among the six actors. As Janice, Amy Staats (left, with Susan Louise O’Connor as her mother)  skillfully communicates the feeling of drowning that envelops this young woman. She virtually quivers with anxiety and earnestness as she attempts to hold her life together. Susan Louise O'Connor is a worthy antagonist, first as her pompous boss Gail and later as her mentally ill mother Theresa. She spouts nonsense for the most part, but her pronouncement that "Blood is fate" reverberates through her daughter's mind and, indeed, through the entire theater. In the role of Paul, Eddie Boroevich beautifully conveys the massive effort needed to hold his life together. Suffering from PTSD after a horrific killing in Iraq, he is a lost soul, alienated from his wife and kids, living in the basement and trying to stay out of trouble. His distress is palpable and heartbreaking. 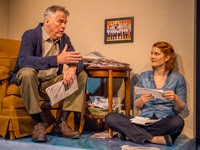 Solid production values, superb acting and direction. Why am I not giving Janice Underwater a five-star review? Maybe because it feels so unrelentingly bleak for much of the time, although playwright Wolfe does provide glimmers of hope by the time the stage lights come down. Perhaps because it is the second play about mental illness (and PTSD) Premiere Stages has produced this season, and feels a bit like overkill.

The dialogue is natural and often clever, and the New Jersey references are spot-on (Wolfe is a New Jersey native). With a bit of fine tuning and tightening up to maintain dramatic tension Janice Underwater has the potential to be a great play. As it is, Janice Underwater shows promise as it addresses mental illness, a topic of great import today, and that's a good thing.

Janice Underwater will be performed at the Zella Fry Theatre on the campus of Kean University, 1000 Morris Avenue, Union, through September 21. Performances are Thursdays through Saturdays at 8 PM, and Saturdays and Sundays at 3 PM, with post-show discussions to follow select matinee performances. For information and tickets, call 908.737.SHOW (7469) or visit www.kean.edu/premierestages  online.