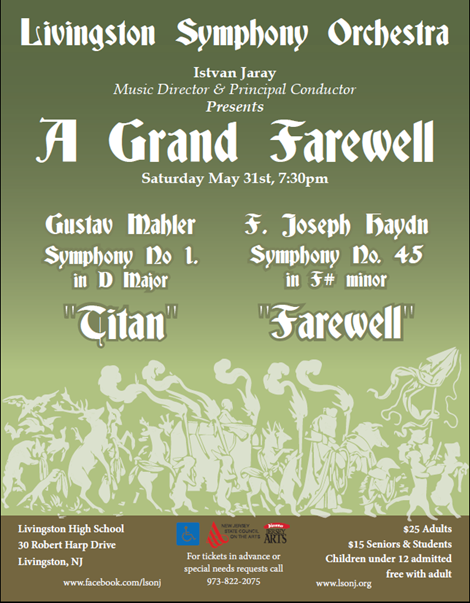 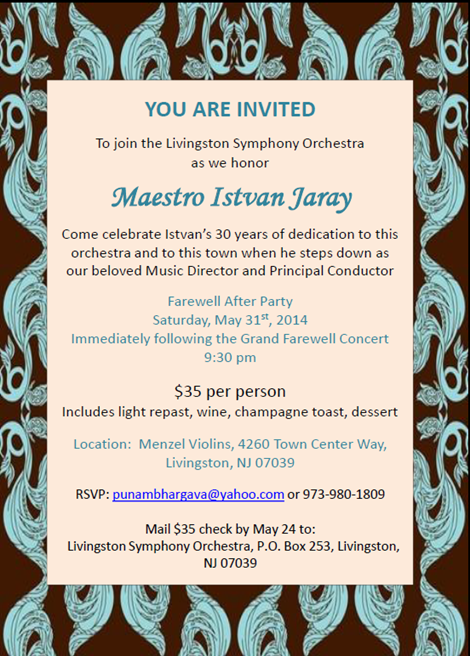 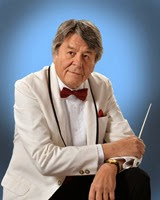 Culminating 30 years of dedication to and affection for the Livingston Symphony Orchestra, Maestro Istvan Jaray leads his final concert as Music Director and Principal Conductor of the orchestra. The orchestra also invites the public to attend the farewell reception in honor of Istvan Jaray immediately following the concert

As a conductor, Maestro Jaray (left) has shared his life experience with orchestra members and audiences, a journey which began in a Soviet occupied Hungary. With a personal and emotional connection to the classics that is evident at both rehearsals and performances, he readily and frequently  acknowledges his heartfelt  appreciation for all the freedoms inherent in our society. His passion and communication through music has taken the Livingston Symphony to a level respected by surrounding communities, musicians and audiences alike. Selected works for his grand farewell event include Gustav Mahler’s Symphony #1, “Titan” and F. Joseph Haydn’s Symphony #45, “Farewell.”

Mahler’s Symphony No. 1 in D major, the “Titan”, written between 1886 and 1888, took a few iterations to get to the version known today. It was originally written as a 5 movement work of programme music, but the original second movement, ‘Blumine’, was removed in 1896. Programme music, the idea first introduced by Franz Liszt, is music that aims to tell a story or paint a picture through melodies and instruments. This symphonic poem is meant to illustrate the life of a man. Following this theme, the symphony’s first movement, slow and restrained, evokes images of nature and includes some folk song elements, embodying the rural lifestyle of Mahler’s youth. The second movement is an animated waltz, interrupted by a slower trio which, according to Mahler, symbolizes this unnamed ‘Titan’ of a man roaming around the world, rough, strong, and fit for life. The third movement is a slower, solemn, folk tune driven movement, representing a funeral march and the final (4th) movement, agitated and fierce, is meant to convey a sudden outburst of despair and a wounded heart. This symphony is also the only one composed by Mahler that is under an hour in length.

Franz Joseph Haydn’s storied Symphony No. 45, the “Farewell” Symphony, aptly comprises the balance of the program. This symphony in 4 movements is so named for its peculiar fourth movement, written so that each musician, except the concertmaster and conductor, gets up, snuffs out his light and leaves the stage before the song has ended. The story goes that it was written this way by Haydn as a not-so-subtle message to his benefactor, Prince Nicholas Esterhazy. During the summer of 1772, it is told that the Prince stayed at his summer palace longer than usual, thus keeping many of the musicians there and away from their families. As this longer than expected stay away from their families dissatisfied the musicians, leaving the stage indicated their own inner desires. Esterhazy got the hint and returned home to Vienna the very next day.