It might be easy to dismiss Joe DiPietro's Clever Little Lies—now receiving its world premiere at the George Street Playhouse under the direction of David Saint— as a bit of fluff were it not for the humanity of its characters and its revelation of the darker truths of our natures. What starts out as a snappy domestic comedy soon devolves into a study of marriage, fidelity, parenting and trust, leaving us much to talk about after the final curtain. 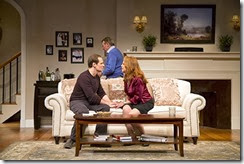 Clocking in at 90 minutes, Clever Little Lies steadily moves along inexorably to a stunning conclusion brought about by a plot twist no one sees coming. When Bill Jr. confesses to his father that he is in love with a woman other than his wife Jane, the mother of his three-month old daughter, Bill Sr. is hard put to keep the news from his wife Alice. But a mother always knows something is amiss, especially when Bill Jr. seems distracted, under pressure and has lost to his father in a weekly tennis match. In a surprising evening with his parents, secrets are exposed, clever little lies and crafted as the confidence shared between a father and son escalates into an unexpected revelation that could change everything. 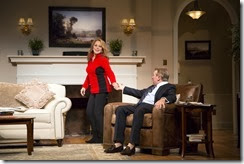 David Saint's masterful directorial skills keep the action moving without sacrificing the actors' delivery of DiPietro's very funny dialogue to a rushed ending. On an elegant set designed by Yoshi Tanokura (a tennis club locker room, a car and a Westchester living room), a quartet of accomplished actors—two veterans, two newcomers, all Actors Equity—act as an ensemble, their familial relationships very convincing. Marlo Thomas—who was scheduled to star in this vehicle last season before a television role came along—delivers a sparkling performance as Alice that reminds us what a terrific comedic actress she is. Her riffs on books (she owns a bookstore) are hilarious and right on the mark, as are her comments about parenting and modern technology. She looks terrific, too, just as one would expect of a woman who manages to get to the gym each day. As her husband, Greg Mullavey is equally as accomplished; his comic timing is on parade albeit less verbally and more physically. Just watching his reactions to startling revelations is a lesson in how to "do" comedy. This is not to say that he doesn't get to deliver some very funny lines too. DiePietro is a master at writing the zinger/put down and Mullavey delivers them well! 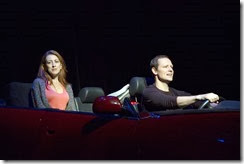 The actors playing the younger members of this family are no slouches either. Jim Stanek takes the thankless role of a unapologetic cad and runs with it. As he recites his lines (very naturally, I might add—as do they all), we can hear how ludicrous his professions of love are, even if he cannot. He also gets to curse a lot, much to his wife's (and his parents') consternation; it is actually very funny to hear him. And as Jane, Kate Wetherhead really shines as she voices the woes of a new mother who is not getting any help and who is ambivalent about returning to work. She, of course, is the most sympathetic of the characters, for dramatic irony is in full swing as we know something she doesn't.

Esther Arroyo has dressed the actors in clothes appropriate to their characters and lives. The projections on sliding panels enhance the action by grounding it in a place (New York City, a highway to Westchester, a country road) without much fuss.

Alice says that parents have to help their children "find the happy," but does she get too clever by a half to do it? You'll have to get on down to New Brunswick to find out what happens and decide for yourself. The combination of comedy and tragedy (or drama) results in a delicious examination of what it means to be a spouse and a parent. Not bad for a 90-minute piece of "fluff."

Clever Little Lies will run at the George Street Playhouse, 9 Livingston Avenue, New Brunswick, through December 22. For performance dates and times and ticket information, call the box office at 732.246.7717 or visit www.GSPonline.org  online. For a $5 discount on tickets, use the code CLEVER5.