He was the subject of two films (the first, The Boy in the Plastic Bubble starring a young John Travolta), a song by Paul Simon, even an episode of Seinfeld. Now, those two zany creators of Despicable Me 2 and Bubble Boy, their comic 2001 film, Cinco Paul (book, music and lyrics) and Ken Daurio (book) have turned the material into a sprightly, inventive and very energetic musical now receiving its world premiere at the American Theater Grou—in residence at Hamilton Stage in Rahway 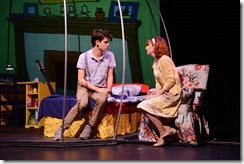 Born without an immune system, Jimmy Livingston is forced to live in a huge, sterilized plastic dome in his bedroom. There, he is home schooled by his devout Christian mother, who uses is The Bible as the science book and permits him only to read Highlights magazine. When a girl named Chloe moves next door, the teenage Jimmy is smitten, and the two develop a sweet and touching friendship. 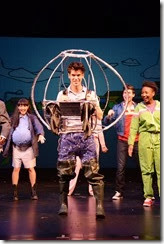 When Chloe announces her upcoming engagement to a rocker schoolmate, Jimmy decides to leave his bubble (by way of a self-constructed bubble suit), follow her from California to Niagara Falls and, effectively, stop the wedding by declaring his feelings for her. Pursued by his frantic parents, he meets an odd assortment of people who open his eyes to the world that has existed outside the universe created for him by his overbearing mother (abetted by a silent dad). Among these is a Manson-like cult, a biker with a flat tire, an Indian who is thought to be an a Muslim terrorist. As he comes to the end of his journey, Jimmy learns some astonishing truths about himself, his parents and the world.

In keeping with the creator's cartoon background (not to mention the cartoonish plot), Deb O gives us a set that consists of clever and colorful projections and props suggesting various venues. Elizabeth Barrett Groth's vibrantly colored costumes befit the characters and provide humor themselves. 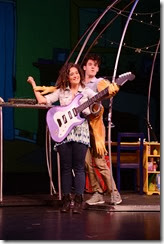 Jen Wineman's adept direction keeps the action moving along at a steady clip with no dead spots or hurried delivery. Paul's songs are lively and appropriate to the plot, although you will not hum them as you leave the theater. "Falling for the Boy," sung by Gerianne Pérez, is a sweet romantic ballad as is "There's a Bubble Around My Heart," sung by Pérez and Chris McCarrell as Jimmy (both, left).

These two actors carry the show with the superior help of Erin Maguire in the thankless role of the misguided Mrs. Livingston, a role she plays with relish and great comedic timing. McCarrell is adorable as Little Jimmy and Teenage Jimmy; his performance is very winning and we can see why the oddballs he meets cotton to him in an instance. Marrick Smith (Mark), Gabriel Sloyer (Todd) and Rachid Sabitri (Shawn) are very funny as slacker rock star wannabes. Sloyer does double duty as Slim (below, with Jimmy) the biker guy, as does Sabitri as Pushpahp, the Indian ice cream and curry truck driver. 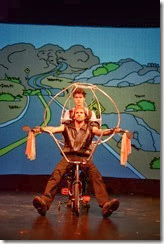 Cinco Paul and Ken Daurio have a fine time mocking folks who profess hatred of what they don't know and fear, and for most of the time, the very un-PC comments are right on the mark. However, one about the Jews is egregious and offensive and plays right into the minds of those who buy the canard about the Jews' love of money. I suggest a rewrite.

Other than that, Bubble Boy is a fitting debut for the American Theater Group, a new troupe that will make its home at the beautiful new Hamilton Stage Theatre. Here's to more polished, professional productions!

Bubble Boy runs through November 24 at Hamilton Stage, 360 Hamilton Street, Rahway. Performances are Friday and Saturday, 8 PM, and Sunday at 2 PM and 7 PM. For tickets and information, call 732.499.8226 or contact www.americantheatergroup.org online.