A SHAYNA MAIDEL
by Barbara Lebow
Directed by Carol Fisher

WHEN: October 26-November 16; Fridays & Saturdays at 8 PM; Sunday matinees at 2 PM
WHERE: Little Firehouse Theatre, 298 Kinderkamack Road, Oradell
TICKETS:
Tickets can be purchased online at www.bcplayers.org, by calling 201.261.4200 or by visiting the box office at 298 Kinderkamack Road in Oradell during the Bergen County Players’ regular box office hours.
Visa, Master Card, and American Express are accepted.
Those interested in Group Sales of 20 or more tickets can call (201) 261-4200, x6.
Parking is free at the Park Avenue municipal lot, across the street, one-half block north of the theater.

Borrowing elements from a number of post-World War II books, this delicate drama about a Polish family split in half for over a decade and then reunited in New York after the liberation of the concentration camps is “an example of heart-on-sleeve theater, but it’s got a big heart, and an ample sleeve, and is irresistible.” (Los Angeles Times) and “an emotional powerhouse of almost overwhelming proportions.” (Hartford Journal Inquirer). 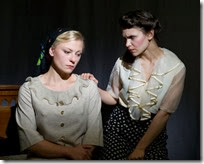 Rose Weiss emigrated to America as a young girl with her father, Mordechai. Her older sister, Lusia, ill with scarlet fever, stayed behind in Poland with Mama, expecting to follow later. The play opens in 1946 with Rose as a young woman living in Manhattan when she learns that Lusia is a concentration camp survivor and is coming to New York. After being separated for over 15 years, the sisters are almost like strangers and must struggle to reconnect. The play is a bittersweet portrait of a family divided by distance, time and life experience. (Above: Lauren Muraski and Shiva Kiani) 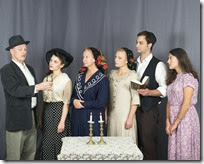 For Director Carol Fisher of Teaneck, staging A Shayna Maidel is not only a labor of love, but very personal. Fisher dedicates this play to her in-laws, who survived the horrors of the war in Europe. She says, “A Shayna Maidel is so well-written and each of the characters has their own battle that they are struggling with. Only through making peace with the past and with each other can they move on with their lives.” She continues, “This play makes me laugh at times and at times shed a tear. But when I cry it is both with sadness and with joy.” (Above left, L-R: Frank Osmers, Shiva Kiani, Mara Karg, Lauren Muraski, Felipe Valente, Emily Bosco)

Bergen County Players has grown tremendously from its roots as a small community theater when it was founded in 1932; today, nearly 300 volunteer members, working on and off stage, make possible the nine productions presented each season.

Further information may be found at www.bcplayers.org

Bergen County Players, Inc., is a non-equity, non-profit community theater company dedicated to presenting quality productions for the enrichment of the community.