This is a marvelous show for the entire family! And Red Bank is a picturesque little town with TONS of restaurants. I really love Jon Bon Jovi’s Soul Kitchen where a meal can cost just $10 (or you can donate more) and tastes delicious. 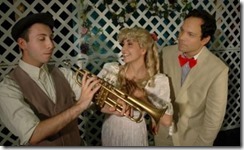 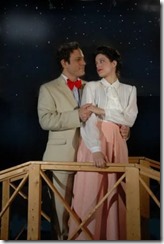 The cast of fifty is headed by Phoenix veteran Joe Caruso, who stars as the charismatic con-man Harold Hill. Phoenix newcomer Caitlin Alongi (right, with Caruso) plays opposite as the charming and curious librarian, Marian Paroo. The cast is mixed in experience and age—members who have been in the Phoenix family for more than 25 years work alongside members as young as four years old.

The Music Man, with book, music and lyrics by Meredith Willson, first came to Broadway in 1957. The story follows con-man Harold Hill, who travels to the small town of River City, Iowa to earn his fortune. His plan to convince the town that they need a boysʼ band so he can run away with their money is threatened by the townʼs piano teacher, Marian, with whom he falls in love with. Will Harold be able to change his ways to pursue his love f 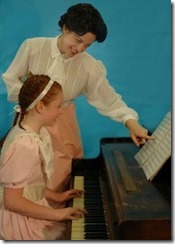 or Marian? With musical numbers like “Till There Was You” and “Seventy-Six Trombones”, it is no wonder the production took home five Tony awards, which includes beating out the iconic West Side Story for Best Musical.

Phoenix Productions is a non-profit community theatre organization devoted to making high quality theatre accessible and affordable. It has been putting smiles on the faces of theatre lovers from New Jersey and beyond for more than 25 years. (Left: Caitlin Alongi of New Providence and Alexandra Pennington of Middletown will appear as Marian Paroo and Amaryllis )

Performances at the Count Basie Theatre in Red Bank are equipped with full-scale sets, costumes, lights and orchestras. Phoenix has become known as “Broadway In the ʻBurbs.”

More information is available at www.phoenixredbank.com.