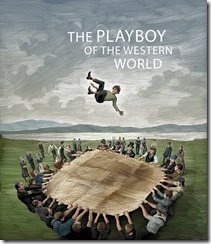 The Playboy of the Western World
By J.M. Synge
Directed by Paul Mullins

WHEN: May 29 through June 23; Tuesdays, Wednesdays and Sundays at 7:30 PM; Thursdays, Fridays and Saturdays at 8 PM; and Saturdays and Sundays at 2 PM
WHERE: F.M. Kirby Shakespeare Theatre, 36 Madison Ave. (at Lancaster Road) in Madison.
TICKETS: Individual tickets range from $35 to $70; student rush tickets are available 30 minutes prior to curtain for $15.
Individual tickets and discount ticket packages are now on sale and can be purchased by calling the box office at 973.408.5600 or by visiting www.ShakespeareNJ.org.

Despite its initial controversy—the play caused riots in the streets of Dublin when it premiered at the famed Abbey Theatre and again when it opened in New York City—Playboy of the Western World has become Synge’s most well-known work and is celebrated as one of the great dramas of the 20th century.  Also a poet and writer of prose, Synge’s works include In the Shadow of the Glen, Riders to the Sea, The Aran Islands, The Tinker’s Wedding and more. His writings, admired for their craftsmanship and use of native dialects, had a tremendous influence on Irish literary and theatrical circles.

Christy, the “Playboy” is played by Michael A. Newcomer, making his Shakespeare Theatre debut.  Newcomer was a company member at the Old Globe Theatre in San Diego, and recently won a Los Angeles Drama Critic’s Circle Award for his performance in The Bunglers at A Noise Within.  He can be seen in the current thriller film A Thousand Cuts.

Company member Izzie Steele plays Pegeen Flaherty, who falls for Christy.  Steele has appeared at The Shakespeare Theatre in Henry IV, Part One, All’s Well That Ends Well and Romeo and Juliet as well as with the Theatre’s Shakespeare LIVE! touring company.  She has also been seen on Law and Order:SVU and will appear in the independent film Mind’s Eye starring Malcolm McDowell and Dean Cain due out this summer.

Shakespeare Theatre veteran Matt Sullivan plays Michael James Flaherty, Pegeen’s father and the local pub owner.  Sullivan has appeared in Shakespeare Theatre productions of Trelawny of the Wells, I Capture The Castle, Othello, The Misanthrope, and Noises Off among others.  Most recently he appeared in Three Musketeers at Cincinnati Playhouse, in Hay Fever at the Guthrie Theatre and off-Broadway in Standing On Ceremony.

Edmond Genest returns to The Shakespeare Theatre for his 18th season to play Old Mahon, Christy’s abusive father.  Genest’s copious Shakespeare Theatre credits include Trelawny of the Wells, Accidental Death of an Anarchist, No Man’s Land, Noises Off, King Lear and many more.  He has appeared on Broadway in The Elephant Man, A Few Good Men, The Real Thing and Whose Life is it Anyway?.

Making her Shakespeare Theatre debut is Emma O’Donnell who plays the widow Quin.  O’Donnell appeared off-Broadway in the Irish Repertory Theater productions of The Shaughraun, Prisoner of the Crown, and The Hairy Ape.  She has appeared at theatres throughout the country including The Guthrie Theatre, Walnut Street Theatre, and Florida Studio Theatre among others.

James Russell plays the young farmer Shawn.  Russell appeared in The Shakespeare Theatre production of The Liar as well as A Midsummer Night’s Dream on the Outdoor Stage.  In New York City, he appeared in The Freedom of the City at Irish Rep, Hamlet, and Tis Pity She’s a Whore among others.  His television credits include Blue Bloods and Deception.

Michael Daly returns to The Shakespeare Theatre for his 6th season to play the farmer Jimmy Farrell.  He has appeared on the Main Stage in The Grapes of Wrath, and Of Mice and Men among others.  Regionally, he appeared in Greater Tuna at Utah Shakespeare Festival, and Pride and Prejudice and Twelfth Night at Orlando Shakespeare Festival.

Director Paul Mullins is in his twenty-second season with The Shakespeare Theatre where he has directed The Liar, Accidental Death of an Anarchist, The Lion in Winter, Noises Off, Private Lives, The Time of Your Life, Rosencrantz and Guildenstern Are Dead, Richard II, Illyria, King John, The Illusion, and Tartuffe among others.  He has also directed Good People, Twelfth Night, Merry Wives of Windsor, Measure for Measure and Macbeth at The Old Globe; Tynan, The Solid Gold Cadillac, The Seafarer, Fat Pig, This Is How It Goes at The Studio Theatre, DC as well as productions at Chautauqua Theatre Company, Portland Stage, Dorset Theatre Festival, Yale School of Drama and The Juilliard School.  As an actor, he has appeared in the Shakespeare Theatre productions of No Man’s Land, Richard III, Othello, Carnival!, Three Sisters, The Forest, and The Homecoming among many others.

For no more than the cost of a regular ticket, three Symposium Series performances are offered for each show and include a post-play discussion with the cast and artistic staff.   Symposium performances for The Playboy of the Western World will be Tuesday, June 4th at 7:30 PM, and Saturday, June 8th and 15th at 2 PM.

For each production, The Shakespeare Theatre presents the popular education program Know the Show. From 7:00 to 7:30 PM, an artist from The Shakespeare Theatre will present a pre-performance talk that provides background information and an insider’s perspective on the production. The Know the Show performance will be held on June 6th at 7:00 PM.  General admission is $5 for the general public, $4 for ticket package holders and subscribers. Tickets to that evening’s 8:00 PM performance may be purchased separately.

The 2:00 PM performance on June 15th will be audio described for those who are blind or have visual impairments.  Audio description enables patrons with visual impairments to hear, through an FM transmitter, a live description of the action on the stage.  A pre-performance sensory seminar is offered that allows patrons to feel props, costumes and set pieces to further enhance their live theatrical experience. The service is offered free of charge.

The Shakespeare Theatre of New Jersey’s Main Stage, the 308-seat F.M. Kirby Shakespeare Theatre, is conveniently located in Madison at 36 Madison Avenue (Route 124) at Lancaster Road (on the Drew University campus), just minutes from routes 287, 78 and 10. Parking is free. The F.M. Kirby Shakespeare Theatre is barrier free with access into the Theatre via a ramp and elevator access to all floors.   Wheelchair seating and transfer seating is available.  Braille and large print programs are available.   Infrared listening devices are available free of charge.  Some performances are audio described.  Contact the theatre for more information. For more information, or to purchase tickets, call 973.408.5600 or visit www.ShakespeareNJ.org.

The acclaimed Shakespeare Theatre of New Jersey is an independent, professional theatre company located on the Drew University campus. One of the leading Shakespeare theatres in the nation, serving 100,000 adults and children annually, it is New Jersey’s largest professional theatre company dedicated solely to Shakespeare’s canon and other world classics. Through its distinguished productions and education programs, the company strives to illuminate the universal and lasting relevance of the classics for contemporary audiences.