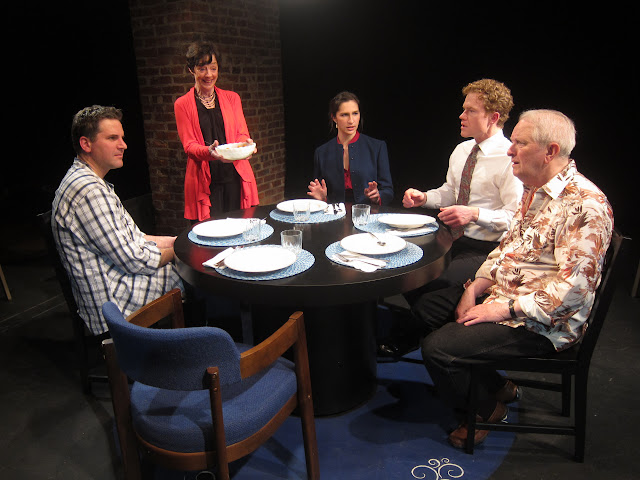 Blood, the bodily fluid that flows through our veins and arteries, is often used as shorthand to explain our familial connections, as in blood relatives. That association is at the heart of Blood: A Comedy, the droll, yet thought-provoking, production of Dreamcatcher Repertory Theatre, now playing at The Baird, but for one more weekend only. (Left: David Miceli, Noreen Farley, Jessica O'Hara-Baker, Clark Carmichael, F. David Halpert. Photo by Steve McIntyre)

The black comedy, written by David Lee White and previously produced but once before at the Passage Theatre in Trenton, concerns not one but two families, the Stanzis and the Fishers, brought together to celebrate the impending marriage of Franny Stanzi and Matthew Fisher. Unfortunately, the happy occasion is clouded by the all-to-obvious signs of matriarch Jacqueline Stanzi's advancing Alzheimer's disease, which leads her to do odd things (or not do those which are expected of her, like lighting the stove's pilot light to cook the chicken for dinner), scaring her daughter, making her hyper-vigilant. 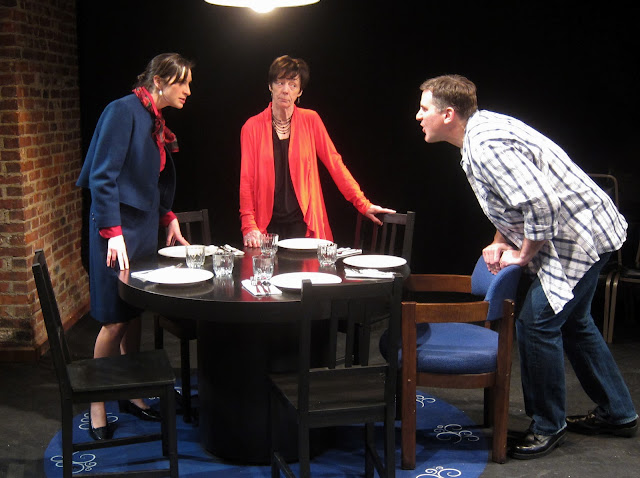 To complicate matters (and to add a bit of malicious fun), Jacqueline (center right) has invited her long-absent (for 7 years!) son Alec (right)  home to attend the dinner and has devised a "game" whereby each guest will confess a secret and be forgiven—and get to eat a cube of very spicy cheese as a reward. Horrified at the thought of revealing their wild pasts, Alec and Franny (left) go at each other with figurative knives as Jacqueline looks on benignly (and a bit like a Cheshire cat licking its lips with glee). Of course, fiancé Matthew Cooper—a born-again evangelical holy roller—and his father Noah don't escape playing the game, with the result that several unexpected truths send the entire dinner party—not to mention those blood relationships—spiraling into chaos, only to show us that we are all related in one way or another.

Laura Ekstrand works her usual directorial magic in a play filled with clever dialogue (and copious cursing) and zany characters. Once again, this repertory company shows just what the word "company" means: they are so used to working together that their chemistry completely convinces us they are a family, albeit a dysfunctional one. As Jacqueline Stanzi, Noreen Farley is a mix of lucidity and looniness, resplendent in a red sweater coat and wide-eyed with glee as she utters, "Let the games begin," knowing full well what will ensue! As a professor of genetics, Farley's Jacqueline gets to recite long asides about the presence of a God gene or ruminate on the nature of love, which she delivers with feeling and clarity (even if we don't understand a word of what she is saying).

Jessica O'Hara-Baker's Franny is "frantic" personified, intent on putting her wild days of sleeping around behind her and starting a new life and furious that her nemesis Alec has arrived to torment her. Watching her melt down over the course of the evening is worth the price of the ticket. As Alec, David 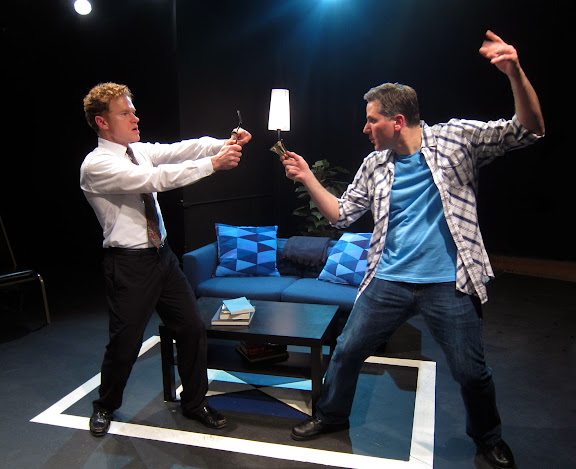 Rounding out the company is David Halpert as Matthew's father Noah. From his vague demeanor, we immediately recognize a man likewise suffering from dementia, although his seems to be more advanced than Jacqueline's. Halpert plays "airy" very well, but his big moment comes when Noah rouses himself to castigate Alec for his arrogance and quick judgment. He pulls himself up to his full height (which isn't much) and reaches way down for the dignity he must have once had. It is an impressive, serious moment in an otherwise nutty situation.

Scenic designer Wesley Krantz has given us a family living room and dining room beautifully lit by Jorge Arroyo with suitable sound supplied by Michael Magnifico. Laura Ekstrand's costumes are perfect for the characters: Franny in a suit appropriate to her new, less wild, life; Alec in a slacker tee shirt and jeans; Matthew in a buttoned-up shirt and tie; and Noah in a Hawaiian shirt to convey his character's fey condition.

Of course, all is not fun and games in Blood: A Comedy. There is a lesson to be learned about relationships, as Alec so succinctly puts it, we are all connected, we all share the same blood.

Alzheimer's disease is not usually thought of as a subject for comedy, but playwright White uses the zaniness and clever dialogue to make us laugh at life's absurdities. That's a gift and one well-delivered by Dreamcatcher Rep!