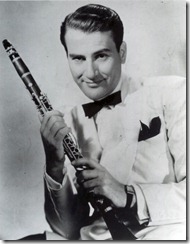 One of the most compelling big-bands ever, The Artie Shaw Orchestra, brings the 2011 Jazz in January series  to a rousing conclusion.

WHEN: January 29, 4 PM
WHERE: Centenary College, Hackettstown
TICKETS: $30 in advance and $35 at the door, and they are available through the Centenary Stage Company box office at 908.979.0900, and online at www.centenarystageco.org.

On the eve of America's entry into World War II, TIME magazine reported that to the German masses the United States meant "sky-scrapers, Clark Gable, and Artie Shaw." Some 42 years after that, in December  l983, Artie Shaw made a brief return to the bandstand, after 30 years away from music,  to launch this latest (and still touring) orchestra at the newly refurbished Glen Island Casino in New Rochelle, New York.

Dubbed “the king of swing” after his hit, Begin the Beguine, Artie Shaw was thereafter renowned for his innovative combination of instruments. This power-house big band has accompanied the likes of Tony Bennett, Jack Jones and Buddy DeFranco.  The band was featured at the Newport Jazz Festival, and they have toured worldwide. The orchestra is under the direction of clarinetist Matt Koza  and will play many of the original arrangements that made this orchestra so popular in the 40’s and 50’s.

“There's nothing like it,” said Matt Koza, director of the orchestra said. “To stand in front of the band, to play the music,  to be surrounded by the full sound of the brass and the rhythm section, it’s  an unparalleled experience.”

“Jazz in January” is made possible through the leadership of CSC Board Chair Ed Coyne and Coyne Enterprises. The Centenary Stage Company is a not-for-profit performing arts series dedicated to serving as a cultural resource for audiences of the Skylands region,  with professional music, theatre and dance events and arts education programming throughout the year.

The “Jazz in January” series is made possible through the generous support of many local businesses, including Heath Village Retirement Community (the CSC  2010-11 “Platinum Sponsor”),   Skylands Community Bank,  Panther Valley Pharmacy and  Hackettstown Regional Medical Center. Year-round performances at the Centenary Stage Company are made possible through the generous support of the Geraldine R. Dodge Foundation, the NJ State Council on the Arts, The Mariott Residence Inn, The Tierney Foundation, and CSC members and sponsors