REVIEW: “THE LION IN WINTER” ROARS AT STNJ

James Goldman’s Tony Award-winning play, The Lion in Winter has been described as a historic drama, a domestic comedy, a sitcom, a melodrama. So which is it? Why, it’s all four, and the play is getting the royal treatment at the Shakespeare Theatre of New Jersey, where it is being performed through November 14.

It’s Christmas 1183 and the Plantagenet family has gathered at the castle of Chinon to celebrate the holiday. Hosting the festivities is Henry II, King of England, along with his estranged wife Eleanor of Aquitaine (released from her castle prison to attend) and their three contrary and quarrelsome sons, Richard, Geoffrey and John. Also in attendance are Alais, princess of France (and Henry’s much younger mistress) and her brother, the newly crowned King of France, Phillip.

What follows is the usual stuff that goes on in dysfunctional families of all stripes: sibling rivalries (for Mummy and Daddy’s affections and, more importantly, for the English throne), jockeying for Henry’s attention (Alais and Eleanor and John) and the rekindling and extinguishing of long-buried spousal feelings between the queen and the king. Not much is resolved, but the audience is treated to one heck of a performance, one with much political maneuvering and manipulation, a great deal of humor (Goldman gives his characters a quiver full of verbal grenades to lob at each other, much to the audience’s delight) and an interesting history story, to boot. Who cares if most of it isn’t historically true; it puts the recent partisan political shenanigans to shame! 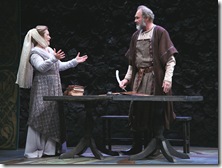 The family may be comprised of people who aren’t really very nice, but the actors assembled by Director Paul Mullins are first rate. Four of the seven are first-timers at STNJ; here’s hoping they return again—soon! Sherman Howard is a commanding Henry II, swaggering around the stage, wrapping everyone around his little finger with his charm. It is easy to see why Alais and Eleanor both love him. His smile lights up whichever “room” he’s in! Lisa Harrow’s Eleanor is his perfect nemesis. Crafty, congenial, witty (when he tells her the “boys” have knives, she retorts, “It’s 1183, Henry, we all have knives and we’re barbarians!”) and charming, Harrow’s raised eyebrow and smug smile telegraph her feelings as Henry pompously announces, “God, but I live being king," and plays games with the throne. The best thing about pairing Howard and Harrow is the convincing chemistry between them. It is easy to imagine the two as lovers/spouses and adversaries not above fighting or imprisoning each other to get what they want. (Above: Lisa Harrow as Eleanor of Aquitaine and Sherman Howard as King Henry II of England. Photo: © Gerry Goodstein) 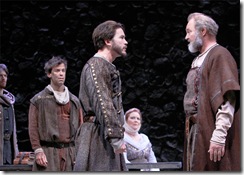 The young actors who play the Plantagenet princes have a difficult task, for none of the three are very attractive personalities. Tom Pelphrey as Richard has the easiest time, for as the oldest (and most intelligent and able), he should be named Henry’s heir, as Eleanor wants him to be. He’s dangerous, however, precisely because he’s smart; but when the slimy, sniveling Phillip (played splendidly by Sean Hudock) betrays Richard, his injured response is worthy of our feeling of compassion. As Geoffrey, the middle son of the three, Devin Norik gripes about being overlooked by everyone, yet uses the neglect to his advantage by plotting and scheming behind everyone’s back. Norik takes a nonentity and turns him into a somewhat sympathetic character, but one who must be watched at all times. And as John, Henry’s odd choice to succeed him Colby Chambers appears to be having the most fun, for the character is a slovenly child who trips over his own shoelaces, an unkempt boy with messy hair and a violent temper—not exactly king material! That he portrays this misfit without a trace of caricature is to Chambers’ credit. (Above: Sherman Howard as Henry II, King of England, threatens his eldest son Richard Lionheart played by Tom Pelphrey while the youngest son John played by Colby Chambers cowers.  Lisa Harrow as Eleanor of Aquitaine looks on. Photo: © Gerry Goodstein)

he surprise performance comes from Laura Campbell as Alais Capet, Henry’s twenty-something mistress. At first glance, you might take the slender, frail-looking actress for a pushover, a pawn in this real game of chess (“There are knights and kings all around, and I’m the only pawn,” she says). I barely remember the actress who played the part in the film starring Katherine Hepburn as Eleanor and Peter O’Toole as Henry. But Campbell’s Alais is a shrewd, fierce force to be reckoned with, more like Eleanor than like most noblewomen of the time. Her demeanor is even more believable because Eleanor raised Alais when the princess came to the Plantagenet court as a child; this apple certainly doesn’t fall far from the proverbial tree! (Above: Sherman Howard plays Henry II, the King of England and his lover Alais played by Laura Campbell. Photo: © Gerry Goodstein)

Director Mullins certainly knows his way around a script. The dramatic tension onstage is unremitting, with a lovely balance between verbal battles, multiple betrayals and warm affection. Michael Schweikardt has designed an all-purpose set that defines various rooms of Chinon Castle through curtains, sliding filigree-like screens and a cold, damp-looking stone wall that stretches across the entire rear of the stage. Richard M. Dionne’s sound, especially the use of drums, helps ramp up the conflict, and Hugh Hanson’s costumes, made mostly of what looks like hand-woven wool, are never intrusive but always medieval.

All this artistry is well served by Goldman’s witty script. Henry continually refers to Eleanor as a Medea, the mythical princess who killed her children to get revenge on her straying husband; Richard says his mother is “as dead as she is deadly”; Henry wants to be remembered as a “master bastard.” And Eleanor’s pronouncement, “What family doesn’t have its ups and downs,” elicits a knowing laugh from the audience.
Historical drama, domestic comedy, sitcom, melodrama—it doesn’t matter what label you in on The Lion in Winter. What the Shakespeare Theatre of New Jersey has given us is a look at life, at real people. They may wear clothing and live in houses different from ours, but their emotions, ambitions and needs are ones we recognize, whether it be 1183, 1966 (the year the play was first produced) or 2010.

The Lion in Winter will be performed Tuesdays, Wednesdays and Sundays at 7:30 PM; Thursdays-Saturdays at 8 PM; and Saturdays and Sundays at 2 PM through November 14. The F.M. Kirby Shakespeare Theatre is located on the Drew University Campus, 36 Madison Avenue, Madison. For information and tickets, call the box office at 973.408.5600 or visit http://www.shakespearenj.org/ .
Posted by Ruth Ross