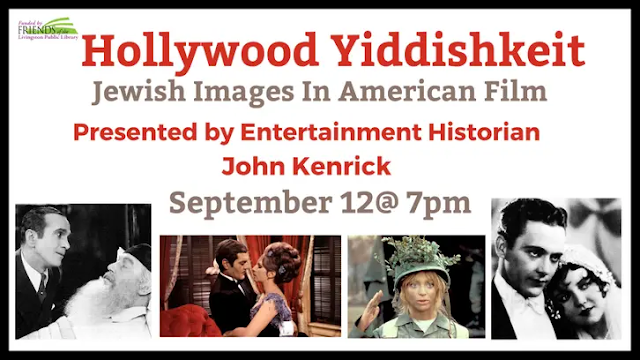 If you think it all began with The Jazz Singer, then in Al Jolson's words, "You ain't heard nothing yet!"

How did early silent films rely on ethnic stereotypes? When did screen depictions of Jews and their culture evolve? How have films dealt with the Holocaust and its survivors? And how have recent films dealt with formerly ignored aspects of Jewish life?

With fascinating film clips and behind the scenes stories, entertainment historian John Kenrick examines a rich but rarely discussed cinematic legacy, how film depictions of Jews and Judaic culture have evolved from the silent era right up to the present.

John has worked in the theater at every level from amateur to Broadway, eventually serving as personal assistant to six Tony Award winning producers, including the team behind the original production of Rent. He has taught musical theater history courses at New York University’s Steinhardt School, The New School University, and Philadelphia’s University of the Arts. He is the creator of the educational website Musicals101.com, and his books include Musical Theater: A History.

It is made possible with the support of The Friends of the Livingston Public Library.