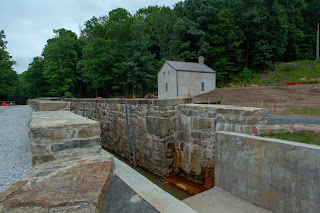 The Borough of Wharton will introduce a new transportation museum with a ribbon cutting ceremony to the public.

Restoration of Morris Canal Lock 2 East Site
Sixteen years in the making began with a plan to revitalize a failing Main Street Wharton business district. The plan was to make Wharton Borough a destination utilizing remnants from its past glory.

Wharton’s Plan
Previously, the Borough purchased the lock site, the canal prism and other adjacent properties in 1926 directly from the State. In 1976 Wharton excavated the existing watered portion of the canal in order to restore the canal prism, becoming one of only a handful of sections of the canal prism that reflects its historic appearance.

The site has become one of the remaining best-preserved watered sections of the Morris Canal in the State of New Jersey. Wharton’s Hugh Force Park contains a remarkable beautiful quarter mile section of the intact Morris Canal. The Park is part of the Morris County Park System and the hub of the West Morris Greenway, the western extension of Patriots’ Path, and is part of the National Park System.

The Plan to make the Borough a destination was conceived in 2004.

Wharton Borough believes that just as the Morris Canal aided in the economic development of the Borough over 175 years ago, the creation of an outdoor museum housing the only functioning Morris Canal lock in the State, will lead to increased tourism to the State of New Jersey and simultaneously improving the economic vitality of its own business district making Wharton a destination.

Through partnering with Federal, State, County, and local government, this goal has been finally achieved. 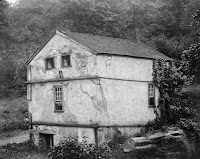 Wharton Borough’s vision to restore Lock 2 East to a condition that is operable has been a multi-year, multi-phase plan with funding and assistance provided from the New Jersey Transportation Planning Authority, New Jersey Department of Transportation, New Jersey Preservation Trust Fund, Morris County Historic Trust, Morris County Park Commission, and the Canal Society of New Jersey.
Canal Day Music & Craft FestivalWharton Borough has been celebrating the heritage of the Morris Canal for over 46 years through its annual Canal Day Festival. The festival is an old-time country fair that celebrates the Morris Canal and its contributions to the development of the communities along its banks.
For more information, visit canalday.org

2006 - NJ Historic Trust and Morris County Historic Preservation Trust Fund provided grant funding of $87,000. The funds were utilized to create an historic site master plan and feasibility study. Funds were also utilized for determining the condition of the buried lock in which 64 shovel tests and large trenches were made, during which 731 artifacts were retrieved.

2007 - Morris County Historic Preservation Trust Fund provided a grant of $100,000 to assist with professional services towards the restoration of the lock. The funds were utilized to acquire DEP permitting and approvals.

2008 - NJ Historic Trust granted an award of $50,000 for the preparation of restoration documents for the lock, canal basin, and lock tender’s house. This work included site analysis, environmental permitting, and schematic design, as well as archaeological monitoring.

2010 - NJ Department of Transportation provided a grant totaling $582,000 to excavate Lock 2E and restore the stone walls to grade level.

2011 - Morris County Historic Preservation Trust Fund provided a construction grant of $286,450 for the fabrication of wood lock gates, control mechanism, and funding for the construction of the lock walls to their historic elevation.

2018 - Morris County Historic Preservation Trust Fund provided a grant of $38,250 for design and contract administration for the lock construction.

Nearly 200 years ago, a group of private investors led by a Morristown businessman George Perrott Macculloch had an idea that revolutionized transportation in Northern New Jersey, and in part, helped to make the industrial revolution possible. It has been reported that during a visit to Lake Hopatcong, Macculloch conceived a plan to transport Pennsylvanian coal to the New York market utilizing a waterway canal.

The Morris Canal (1831-1924) was world famous and considered an engineering marvel of its time. It was the world’s highest climbing canal ever built. At 1,674 feet, its elevation change dwarfs the Empire State Building by 624 feet. The mountain climbing canal used a series of 23 lift locks, and 23 incline planes, to overcome the highlands of North Jersey. Canal locks were used to raise and lower the water level of the canal to make it possible for canal boats to traverse the extreme elevation changes that exist from the hills of Northern New Jersey to sea level at Jersey City. The total trip of 102 miles took 5 days from Phillipsburg to Jersey and was powered by two mules.

The construction of the Morris Canal not only transformed business and industry throughout the nineteenth century in Northern New Jersey but was also an imposing figure on the landscape and helped to dictate development in many of the towns, boroughs and villages along and near the canal route. The technological innovation that is the Morris Canal also helped to make possible the industrial revolution by bringing the anthracite coal from Pennsylvania to the furnaces of Morris County.

After 100 years of service, the technology of the Morris Canal was overtaken by the railroad because the steam engine was believed to be quicker, and more reliable and did not need to be shut down during the winter freeze.

Although traffic on the Morris Canal had diminished by the 1880s due to an increase in the reliance upon the railroad to transport goods between the coal mines in northeastern Pennsylvania, the forges, mines and foundries of northwest New Jersey, and the industrial plants in northeast New Jersey, the canal was not officially abandoned until 1924. Upon its abandonment, the State of New Jersey systematically drained the canal and dismantled many of the buildings and structures that were used for the functioning of the planes and locks. Much of what was the canal route today is either in ruin, has been removed from the landscape due to development, or is in some other manner unrecognizable as a remnant of the canal. Lock 2 East, as one of the best-preserved sections of the Morris Canal and featuring a rare portion still partially filled with water, serves as an exception. Although the lock was in-filled including removal of the top few feet of the lock walls, the site retained a high degree of integrity.

Presently, the Lock 2 East site is in its final stages of restoration and will be finalized in the Fall of 2022. The Borough is in negotiations with the Canal Society of New Jersey to interpret the site. It is hoped that the program will grow to be able educate the general public along with busloads of student from local schools on how the Morris Canal transformed Northern New Jersey through its engineering and economic impacts.