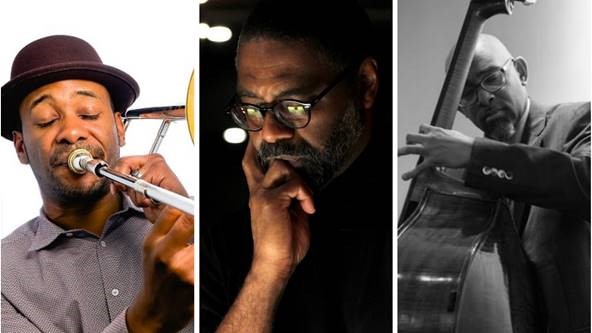 The New Jersey Youth Symphony (NJYS) announced today that trombonist and composer Dion Tucker and longtime Garden State educator Gregory Williams will be joining the Jazz faculty this Fall as Director of NJYS Jazz and Jazz Orchestra and Director of NJYS Big Band, respectively. Dennis Mackrel, assistant chair and professor of jazz studies at the Aaron Copland School of Music at Queens College, will serve as inaugural artist-in-residence.

Building on its mission to train and foster the next generation of young jazz musicians, NJYS is delighted to continue to attract leading musicians and educators to teach, oversee new initiatives and programs, and develop innovative courses, a path the youth orchestra organization has been steadily following in recent years. Tucker, Williams, and Mackrel will join faculty members David Schumacher, Director of NJYS Jazz Workshop and Saxophone Ensemble, drummer Matt Slocum, and saxophonist Lance Bryant in inspiring the students of the growing jazz program.

Said Artistic Director and Principal Conductor Helen H. Cha-Pyo, “I am incredibly excited to welcome Dion Tucker, a consummate performer and educator, as our new Director of NJYS Jazz program and Jazz Orchestra. Under the leadership of Mr. Tucker, Mr. Williams, and the talented team of jazz faculty, NJYS will continue to work diligently to offer our young jazz musicians exceptional opportunities to learn and perform at a high level. I am also thrilled our students will have the opportunity to learn from Dennis Mackrel, an award-winning drummer, conductor, and composer/arranger.”

Dion Tucker has been a member of The Harry Connick, Jr. Big Band since 2007, performing for President Barack Obama at the 2012 Governors Ball and at the Papal Mass for Pope Benedict at Yankee Stadium in 2008. He was lead trombonist in the 2011 Broadway revival of On A Clear Day and in the 2018 stage adaptation of the Academy Award-winning film The Sting at Paper Mill Playhouse. Previously, he toured with the rock band Matchbox 20 and was lead trombonist in The Duke Ellington Orchestra from 2003 until 2013.

Said Tucker, “As the new director of the jazz program, I'm really excited to work with each and every student! Educating the next generation of musicians is very important to me. I am a product of programs just like NJYS, and I would not be where I am today without them. I look forward to discovering and highlighting the special talents that lies within each student."

As an educator, Tucker has taught in over 20 New York City public schools through the Jazz at Lincoln Center’s Jazz For Young People program and was a faculty member at Jazz House Kids, a music education program in New Jersey fronted by Christian McBride.

“As we further advance the jazz program at the New Jersey Youth Symphony, we are also very grateful to our outgoing director, Julius Tolentino, for building the NJYS jazz program to reach such a high level of excellence in a short period of time,” said Peter H. Gistelinck, Executive Director at the Wharton Institute for the Performing Arts.

Jazz educator Gregory Williams has nearly a quarter of a century of experience in the classroom serving diverse student populations. As a professional musician, composer, arranger, and copyist, Williams has toured and recorded with notable artists including Marcus Roberts, Eric Reed, Wynton Marsalis, Delfeayo Marsalis, Vincent Gardner, Elvin Jones, Wycliff Gordon, Tim Warfield, and Terell Stafford. Awarded the 2006-2007 and 2009-2010 Educator of the Year Award by the Plainfield Public Schools, his students have received recognition in dozens of festivals and competitions, including a superior rating and best rhythm section award at the 2013 New Jersey Association for Jazz Education State Final Jazz Festival.

Described by the Los Angeles Times, "Mackrel's drumming, especially well-displayed in his brushwork solos on ballads, was illuminated by his far-ranging experience and his skills as a composer and arranger." Dennis Mackrel is a noted jazz drummer and highly respected composer/arranger and conductor whose work has been recorded and performed by the Count Basie Orchestra, Dizzy Gillespie All Star Big Band, WDR Radio Big Band (Germany), Jazz Orchestra of the Concertgebouw (Holland), Klüvers Big Band (Denmark), and the McCoy Tyner Big Band, whose Grammy-winning CDs include Mackrel’s arrangements.

Mackrel has won numerous awards including Who’s Who in Music, A National Endowment for the Arts grant for composition, and Outstanding Alumni from the University of Nevada, Las Vegas. He is an experienced jazz educator who conducts master classes, seminars, and workshops throughout Europe, Asia, Canada, and the United States. As Artist-in-Residence, Mackrel will work with NJYS’ young jazz students in six monthly clinics from October to April on Sunday afternoons.  These clinics will be free and open to New Jersey jazz educators to attend and observe. More information about the residency will be available at NJYS.org.

The New Jersey Youth Symphony (NJYS), founded in 1979, is a tiered orchestral program offering ensemble education for students in grades 3-12 across New Jersey. NJYS has grown from one orchestra of 65 students to over 500 students in 15 different orchestras and ensembles, including the internationally recognized Youth Symphony. NJYS ensembles have performed in venues including the New Jersey Performing Arts Center, Carnegie Hall, and the John F. Kennedy Center for the Performing Arts. NJYS has received numerous prestigious awards for its adventurous programming from the American Society of Composers, Authors, and Publishers (ASCAP) and has had six European tours, including participation in the Summa Cum Laude International Youth Festival and Competition (Vienna), winning First Prizes in July 2014 and 2017.

Now in its 43rd season, NJYS continues to achieve musical excellence through intensive instruction and high-level performance. Under the guidance of a talented team of conductors, coaches, and teaching artists, students are immersed in challenging repertoire, learning the art of ensemble playing, and exploring their potential in a supportive and inclusive environment. NJYS remains committed to programming works by diverse composers and featured 20th century African American and women composers such as Duke Ellington, George Walker, Yvonne Desportes, Emma Lou Diemer, Julia Perry, and Florence Price.