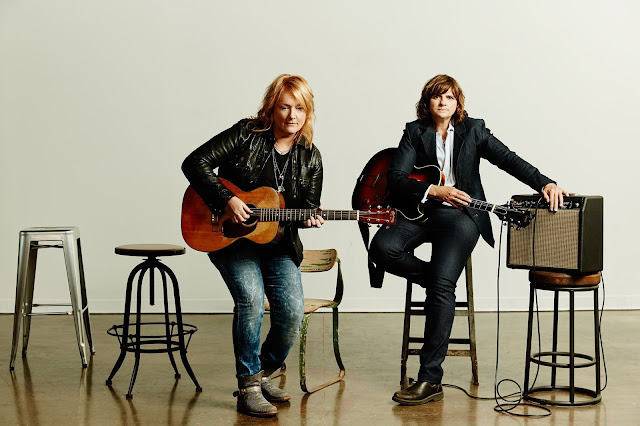 WHEN: Tuesday, March 26, 2019, 8pm
WHERE: State Theatre, 15 Livingston Ave., New Brunswick
TICKETS: $39-$99
For tickets, more information, or group discounts, call State Theatre Guest Services at 732-246-SHOW (7469), or visit us online at STNJ.org. State Theatre Guest Services, located at 15 Livingston Ave, New Brunswick NJ, is open Monday through Friday from 10am to 6pm; Saturday from 1pm to 5pm; and at least three hours prior to curtain on performance dates unless otherwise specified. Additional ticket and transaction fees may apply.

This duo’s hits include “Closer to Fine,” ”Galileo,” “Power of Two” and “Least Complicated.” Joining the Indigo Girls for this performance is violinist Lyris Hung.

Thirty years after they began releasing records as the Indigo Girls, Amy Ray and Emily Saliers have politely declined the opportunity to slow down with age. With a legacy of releases and countless U.S. and international tours behind them, the Indigo Girls have forged their own way in the music business. Selling over 14 million records, Ray and Saliers are the only duo to have Top 40 titles on the Billboard 200 charts in the 1980s, 1990s, 2000s, and 2010s.

The power of unity, both in music and in life, has been an Indigo Girls calling card ever since they burst into the spotlight with their 1989 self-titled breakout album. Since then, the band has racked up a slew of Gold and Platinum records, taken home a coveted Grammy Award®, and earned the respect of high profile peers and collaborated with people from Michael Stipe to Joan Baez. NPR’s Mountain Stage called the group “one of the finest folk duos of all time” while Rolling Stone said “they personify what happens when two distinct sensibilities, voices, and worldviews come together to create something transcendentally its own.”

In 2012, the Indigo Girls embarked on a bold new chapter, collaborating with a pair of orchestrators to prepare larger-than-life arrangements of their songs to perform with symphonies around the country. The duo found an elusive sonic sweet spot with the project, creating a seamless blend of folk, rock, pop, and classical that elevated their songs to new heights without scarifying any of the emotional intimacy and honesty that have defined their music for decades. Now, after more than 50 performances with symphonies across America, the experience has finally been captured in all its grandeur on the band’s stunning new album, Indigo Girls Live With The University of Colorado Symphony Orchestra.

Lyris Hung began her violin studies at the age of three in Fairfield County, Connecticut. At 11, she was accepted into the Juilliard Pre-College Division and at 17 she started a double-degree program between the Juilliard School and Columbia University.

At college, Hung was active in contemporary music performance, playing regularly with the New Juilliard Ensemble and at the Museum of Modern Arts Summergarden concerts. At Juilliard during that time, she performed with a number of stellar conductors such as James DePriest, Kurt Masur, Pierre Boulez, and Bobby McFerrin, and toured Japan and Korea with the Juilliard Orchestra.

Since then, Hung has become an active session violinist in NYC, performing and recording with artists from many genres. She has been heard on Bryan Adams' MTV Unplugged, live with Bono and Quincy Jones at the 1999 NetAid concert, live with the 2003 Trans-Siberian Orchestra, and has toured Europe and America with RCA recording artist Ke. In addition to touring regularly with the Indigo Girls, Hung has also played with hip-hop giant Jay-Z and Beyoncé with QuestLove of the Roots, Dan Zanes, Ornette Coleman, Toshi Reagon, and many others.