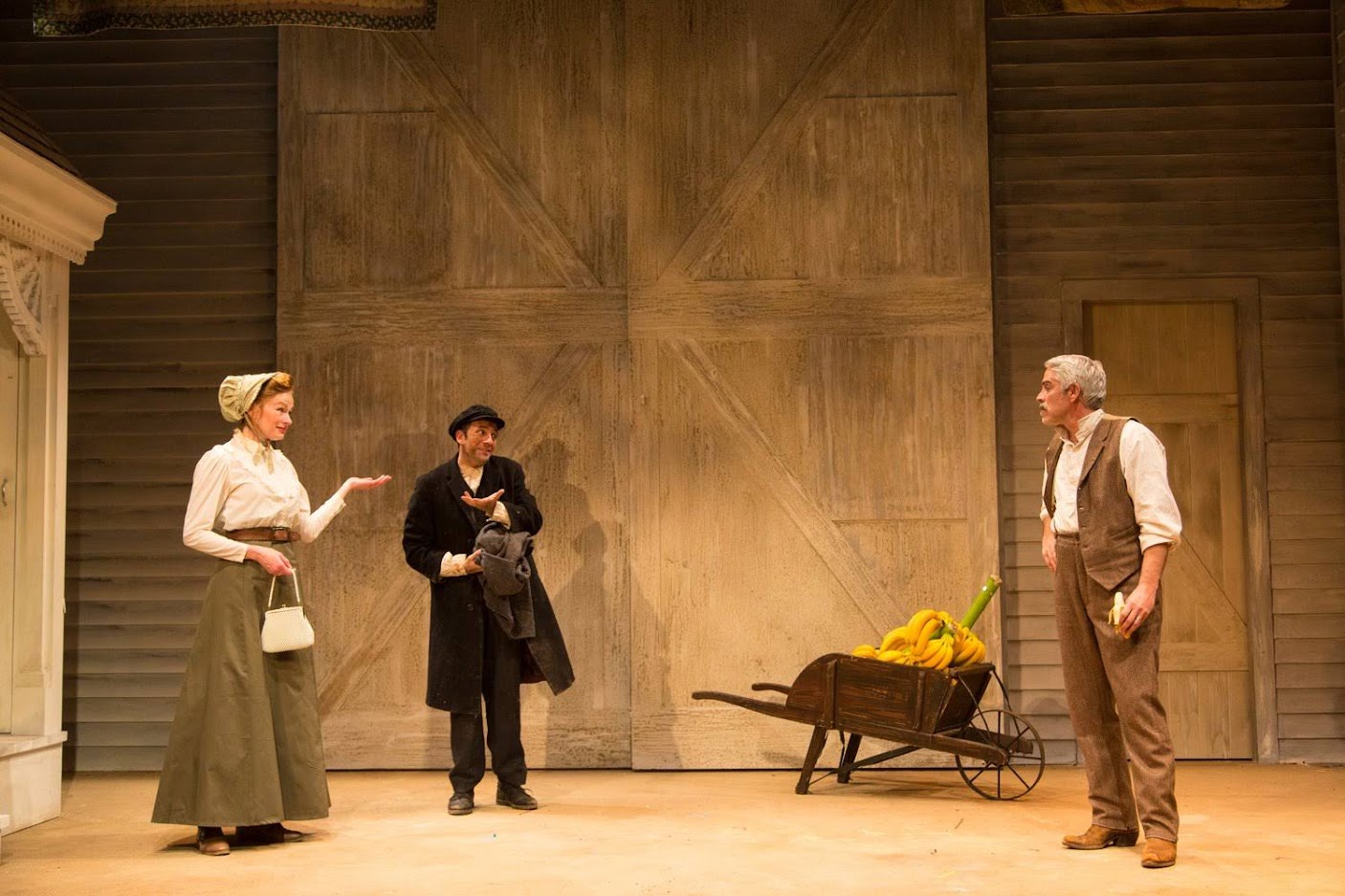 In an era of fear-inducing rhetoric about immigrants from Mexico and Central America—most of them women and children fleeing violence in their home countries—invading our Southern border, George Street Playhouse’s poignantly charming production of The Immigrant is a welcome antidote to the hysteria. Chronicling the real-life experiences of his grandfather, playwright Mark Harelick has fashioned a play that illuminates the positive effects immigrants to the United States have on our society, our business community and our understanding of what it means to be human.

Over a timespan of about 75 years, we follow the trials and travails of Haskell Garelick (later renamed Harelick to avoid the association with garlic) after he fled the violent pogroms perpetrated by Russian Cossacks et al on the country’s Jewish citizens. After disembarking at the port of Galveston, Texas, in 1909, Haskell makes his way to the little town of Hamilton with a wheelbarrow filled with bananas that he sells for a penny apiece. One of his customers, the good Christian woman Ima Perry, takes pity on the poor Yiddish-speaking, earnest young man, buys his bananas and convinces her skeptical banker husband Milton to let Haskell wash up at their well and, later, to rent a room in their house—the room formerly occupied by Charlie, their son who ran away and hasn’t been heard from since. Over the course of time, Milton lends Haskell money to upgrade to a wagon and horse to a fruit and vegetable market to, finally, a dry goods store. With no Jews in the area, Haskell sheds his yarmulke, abandons the kosher laws governing food and becomes a secular Jew, a situation that pains his wife Leah, whom he brings over with the money he’s squirreled away from his business. The two build a business; raise a family of three sons; engender a friendship with the Perrys who, despite their fear (and initial denigration) of Jews, discover that they have more in common than they thought; and pursue the American Dream.

This heartwarming, uplifting story is told through a series of vignettes by a quartet of talented actors. Benjamin Pelteson (left) is spot on as Haskell, speaking Yiddish (interlaced with a bissel English) for most of the first part of the play, writing yearning letters to his wife Leah back in Russia and attempting to make sense of this new life. He’s acquiescent too until 1939 when he bares his soul in an argument with Milton Perry. Chafing under feeling a need to express his gratitude for his mentor’s support, Pelteson really rises to dramatic heights when he cries, “When do I get to be a man?”

As Milton, Haskell’s adviser and nemesis, R. Ward Duffy (right, with Pelteson) is appropriately gruff and distrustful of the stranger, but is quick to show his respect for Haskell’s work ethic. He’s especially tender in the scenes where he and Haskell wait out Leah’s labor pains, when he reveals what went on with Charlie that caused his son to leave.

The women are equally as fine. Lauriel Friedman’s Leah will break your heart as she struggles with a language and customs that make her feel stupid. Her scenes with Ima are touching as the two grow closer, despite their cultural and religious differences, and Friedman convincingly conveys Leah’s growth from fearful girl to the family matriarch. Gretchen Hall’s Ima struggles, too, with her fear of “the other,” but she’s game to learn new Yiddish expressions, to much merriment as she mispronounces words but gets the idea of what they mean. Her maternal side is awakened again, as she fusses over Leah and beams with pride as her protégée blooms into a competent, confident young American woman.

Jim Jack (who directed My Name Is Asher Lev) directs with compassion and skill; the scenes change smoothly, thanks to Jason Simms’ very functional scenic design (sliding barn doors open to reveal a variety of venues, handmade quilts hang above the stage) atmospherically lit by Christopher J. Bailey. Actual photographs of Haskell and family, Hamilton and, later, their sons are projected on the back wall of the stage, giving the play verisimilitude and reminding us that the characters and events are real. Scott Killian has composed original music blending klezmer and country that will set your toes tapping. And Àsta Bennie Hostetter’s costumes, especially those worn by Leah, beautifully evoke the passage of time—and fashion styles!

For me, the most moving part of The Immigrant is the final scenes, where Pelteson as Milton Harelick (the playwright’s father) brings us up to 1985. While I won’t give anything of substance away, suffice it to say that I had to dig for some tissues.

The hardships endured by Haskell Harelick are universal: learning a new language, learning to navigate the culture and customs of his new country, clinging to or shedding his own religious and cultural traditions. The United States is a nation of immigrants; everyone here came from somewhere else. The Immigrant reminds us of the great contributions of the immigrants who came before us (and who are our own ancestors)—and of those attempting to come right now. It’s difficult to make the case for denying them a new, safe life after seeing this moving production. Kudos to the George Street Playhouse for reminding us of our past—and future.

The Immigrant will be performed at George Street Playhouse’s temporary space at 103 College Farm Road, off Route 1 South, in New Brunswick, through April 7. Bring the family to see this heartwarming play. For information and tickets, call the box office at 732.246.7717 or visit www.GeorgeStreetPlayhouse.org online.