The play chosen from the 2017 Centenary University Women’s Playwrights Series for production in 2018 is Michelle Kholos Brooks’ Hitler’s Tasters.

Kholos Brooks said she heard the story of the last remaining woman who had been a food taster for Adolph Hitler during World War II. She began to imagine what life would have been like for these women, kept in a room all day waiting for three meals to be tasted before they were sent to the Fuhrer. (Above L-R: Brianna Morris as Anna, Jennifer Robbins as Leisel and Emaline Williams as Hilda. Photo by Chris Young)

She knew none of the woman actually died of poisoning. Most were killed when the Russians invaded, but she also knew nothing had been written about their lives.

She imagined what it must have been like, girls talking about movie stars and who was the cutest guard and then, reality sets in, and they know they could die after any meal.

The four-person play was presented in the round in the Kutz Black Box Theater in the university’s Lackland Center for the Performing Arts. It was a good choice because the play is intimate. Not only because of having only four character, but also because it is a play about interaction. 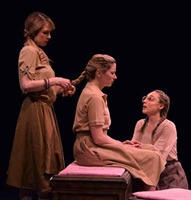 The girls are Hilda, played by Emaline Williams, an Actors Equity member, who portrays a “good German,” daughter of a prominent military man (or so she says) willing to die for the Reich. Jennifer Robbins, also an Equity member, is Liesel, often the peacemaker. Brianna Morris, a Centenary student is a candidate for Equity, plays Anna, who often fixates on the fact they could all die and who disappears halfway through the play. Equity candidate Ally Bergstrom is Margot, who replaces Anna and has no idea what she has been sent to do until Hilda and Liesel explain. (Left: Ally Borgstrom as Margot, Emaline Williams as Hilda & Jennifer Robbins as Leisel.)

All four actresses are excellent. Morris is intense and occasionally naïve as Anna. Robbins is a calming influence. Williams displays a scary intensity. Bergstrom handles coming in to an established unit seamlessly.

Kholos Brooks said she inserted anachronistic touches because she didn’t want the girls to “be frozen in history. History has not been good to girls.”

Those touches, notably the cell phones with which the girls were constantly taking selfies but could not use for communication, were awkward when juxtaposed with crushes on Frank Sinatra and Cary Grant and wanting to dance like Ginger Rogers, but didn’t detract from the power of the play.

Producer/director Sarah Norris has staged the show sparsely with three trunks that held the girls’ changes of clothes and the “food” they were served. The guards are portrayed with sound and shadows.

The author said she left much to the director’s imagination and was pleased with the result. She was leaving the morning after the premiere for Los Angeles where her play Hostage is being staged. It is based on the 1979 Iran hostage crisis.

Hitler’s Tasters was chosen after a staged reading in the 2017 Women Playwright Series. This year’s readings will be April 11, 18 and 25. Further information at www.centenarystageco.org.