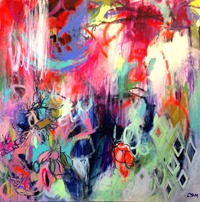 WHEN: October 2-20; An Artists’ Talk will be held Friday, October 6, from 5-6 p.m. A reception will follow from 6-7 p.m. Both are free of charge and open to the public. Refreshments will be served.
WHERE: Art Gallery, 118 Lamington Rd., Branchburg

The exhibition will feature recent work by 33 RVCC visual art alumni in an array of media including animation, ceramics, drawing, furniture design, graphic design, painting, photography, printmaking, and sculpture. Recent visual art alumni were given the opportunity to submit up to five newer works for review. VAPA faculty members Darren McManus and Ann Tsubota made the final selections for the exhibition.