WHEN: SATURDAY, August 19, from noon until 10:00 p.m (rain or shine)
WHERE: Morristown Green
TICKETS: Free
Many local restaurants will be offer specials for festival attendees. Bring your lawn chairs and blankets 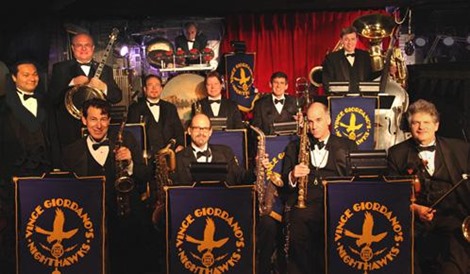 The popular festival begins at noon with the Grammy Award-winning Vince Giordano & the Nighthawks, undoubtedly one of the best known and most popular jazz bands in the country. Performing the music of the Twenties and Thirties, the Nighthawks have appeared in many films including “Carol,” “The Cotton Club,” “The Aviator,” and “Finding Forrester.” And it was their music and frequent performances on the HBO series “Boardwalk Empire” that made them an international sensation and provided a close link with the Atlantic City of the Prohibition Era. (courtesy of Vince Giordano)

At two o’clock, legendary guitarist Bucky Pizzarelli returns to the stage with his quintet featuring his long-time partner Ed Laub on guitar, his number two son Martin Pizzarelli on bass, the young sax sensation Linus Wyrsch, and Ken Levinsky on piano. Born and raised in Peterson, Bucky may be 91 but he maintains a youthful exuberance and unparalleled virtuosity on his distinctive seven string guitar. Elected to the New Jersey Hall of Fame in 2012, Bucky has recorded and performed with everyone from Benny Goodman and Frank Sinatra to The Four Seasons and Paul McCartney. (photo courtesy of Ed Laub) 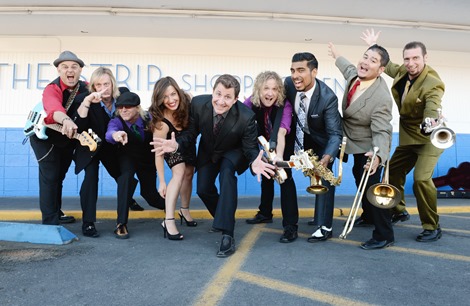 Then at four, the festival is proud to bring back to the stage Louis Prima Jr. and the Witnesses who were a sensation in 2016. The band not only plays the music of his incomparable father, including such hits as “Jump Jive ‘an Wail,” “Just a Gigolo,” and “Sing Sing Sing,” they very much have their own sound and material. Louis Prima Jr. has close ties to New Jersey as his mother Gia Maione Prima was raised in Toms River and graduated from Toms River High School before embarking on her own singing career. (photo by Denise Trucell)

At six o’clock, the music turns the blues with six-time Blues Music Award nominee Ana Popovic and her band. The Serbian guitar-player and singer tours the world and has become a popular performer at blues festivals both here and abroad. She was the only female guitarist invited to be part of the Experience Hendrix Tour, sharing the stage with stars like Buddy Guy, Jonny Lang, Kenny Wayne Shepherd, and Zakk Wilde. And her records routinely reach the top of the Billboard Blues Charts.
photo by Martine Felice Berendsen

The full day of music concludes with The Walter Trout Band led by the critically-acclaimed guitarist. Walter Trout was born and raised in Ocean City, New Jersey before moving to Los Angeles to break into the blues circuit. He quickly earned a reputation backing greats such as John Lee Hooker, Big Mama Thornton, Lowell Fulsom, Percy Mayfield, and Joe Tex. In 1981, he became lead guitarist for Canned Heat where legendary bluesman John Mayall heard him and invited him to join the Bluesbreakers. Following in that group’s tradition of great guitars, such as Eric Clapton, Peter Green, and Mick Taylor, helped Trout solidify his reputation as a top player. When he finally went out on his own, he became a chart-topping star in Europe. He is a 3-time winner of the “Overseas Artist of the Year” from the British Blues Awards, a winner of the prestigious Sena European Guitar Award, a 3-time Blues Music Award nominee, a top-ten guitar player in the BBC’s Guitarist Listeners’ Poll, and a winner of 2 Blues Music Awards in 2016. (photo by Greg Waterman)

Walter Trout will bring a very special guest to the stage with him, the incredible saxophonist Mark Rivera. Rivera may be best known as Billy Joel’s longtime saxophonist, contributing some of the best known sax work in music history, he also tours with Ringo Starr’s All-Star Band and has worked with Elton John, Steve Winwood, Joe Walsh, and many others.

Festival co-producer Linda Smith is pleased to have Walter Trout close the show this year. “Walter has become one of the biggest names on the blues circuit,” she said. “And he is thrilled to return to New Jersey where he got his start. I’m expecting a huge party on the Green all day long particularly with the addition of Mark Rivera.”

Mayor Tim Dougherty, who initiated the festival in 2011, added “Every year we have several surprises for the crowd as well as some old favorites. And this year is no different. With great jazz in the afternoon and hot blues in the evening, there is something for everyone’s tastes and the festival is becoming of the most popular in the Northeast. We are so grateful to our generous sponsors for making this incredible festival possible. ”