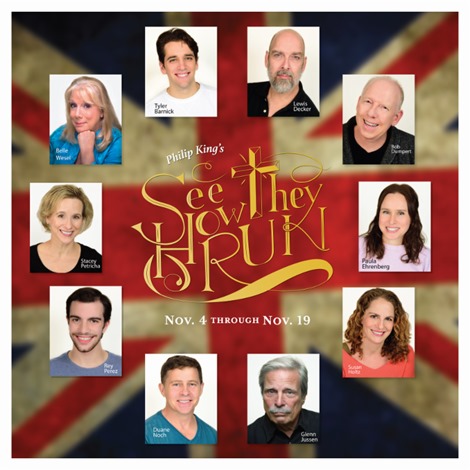 See How They Run
by Philip King
Directed by Belle Wesel

WHEN: beginning November 4 and continuing through November 19. Evening curtain times on November 5, 11, 12, 18 and 19 are 8 p.m. and matinee performances November 6 and 13 begin at 2 p.m.
WHERE: The Summit Playhouse is located at 10 New England Avenue, Summit, NJ.
TICKETS: $20 for adults and $15 for students, can be purchased by visiting http://www.brownpapertickets.com/event/2600113 For more information, visit www.thesummitplayhouse.org/ or call 908-273-2192.

See How They Run is set in the idyllic village of Merton-cum-Middlewick, England during the 1940s. As World War II rages on, the village inhabitants are preparing themselves for the imminent threat of Nazi invasion.

Meanwhile, resident spinster, Miss Skillon, becomes convinced that her beloved vicar's actress wife is having an affair and attempts to expose her.

Galloping in and out of the four doors of an English vicarage are an American actor and actress—he is now stationed with the air force in England—a cockney maid who has seen too many American movies, an old maid who "touches alcohol for the first time in her life," four men in clergyman suits presenting the problem of which is which—one is an escaped prisoner, and a sedate Bishop aghast at all these goings on and the trumped up stories they tell him.

All of which adds up to what Variety calls “A breathless show, with a fast tempo, and plenty of laughs."