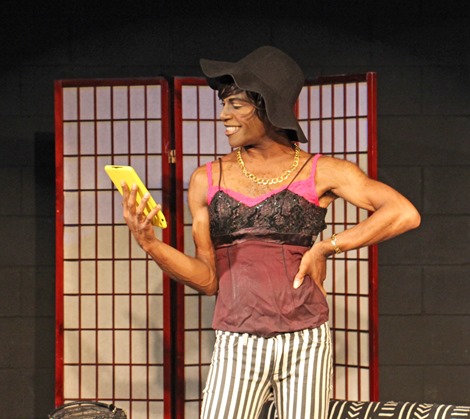 The BOX, a curated showcase of music, spoken-word, dance and other performances concludes Vanity, the thematic series presented by Jersey City Theater Center (JCTC). The evening also includes an artist reception and gallery closing for the Vanity Art Show, the visual arts component of the series.

JCTC presents thematic series—exploring through multiple art forms a topic global in scope yet relevant to the community. Vanity, which began September 16th with a visual arts exhibition and weekly performances, including theater, performance-art and dance, as well readings and film that explored the current manifestation of narcissism, such as selfie-culture, celebrity obsession, and personality politics.

The BOX which refers to the black box theater at Merseles Studios, wraps up Vanity with a curated variety show of music, spoken-word, poetry readings, dance and other performances. JCTC solicited submissions on Vanity for The BOX, through notices in Back Stage and other publications, as well as online sources, entertainment and theater blogs and throughout social media. A panel, including members of JCTC’s Creative Board, selected from the submission using as a criteria artistic excellence, originality and how the work reflected the Vanity theme. The evening was arranged and curated by Dan Pieraccini, Production Coordinator, JCTC.

“It is a pleasure for JCTC to nurture new voices and support all different forms of arts,” said Olga Levina, Artistic Director, JCTC. “We want to give as wide a variety of artists as possible the space to bring their work to Jersey City audiences. The BOX is presenting a remarkable selection of talent and ideas to close this series and it’s amazing how deeply these pieces explore the Vanity theme.”

Featured performances include Music: Refraction and Reflection by Ariel Guidry; The Lady in the Mirror by Elena Zazanis; Watch by Andre Davi; Why by Julie & Makeda; Poetry/Spoken Word: Focus on You by Rescue Poetix; Vanity Vamp by Ben LaGue; Dance: Colored by Kyle Marshall,

MC for the evening will be Anthony Wills jr. and his own cast of characters, including Her Majesty Ms. V (that’s V for Vanity), who made an memorable appearance at the Vanity Opening two months ago. Wills, an actor, writer, singer, visual artist and performance artist has performed all over the country including The New Museum, Steppenwolf, Utah Shakes and Milwaukee Rep Wills has performed with Susan Sarandon, Philip Glass, and Tony nominee Marla Schaffe and is also Artistic Director of A.P.P. (Artistic Pride Productions.

As it has been for all Vanity events, the art gallery at Merseles Studios will open during The BOX. “This is the last time to see this wonderful, thought provoking collection,” said Levina. “We like bring together the community of artists for one more night to say goodbye to this series.”

Vanity was also made possible through the generosity of Ben LoPiccolo Development Group, JCTC’s Board of Directors, private donors and local Jersey City businesses.

PHOTO: Anthony Wills jr. as Her Majesty Ms. V, serves as MC for The BOX, a showcase of song, spoken word, dance and performances that closes the Vanity series, presented by Jersey City Theater Center (JCTC) at Merseles Studios. (Photograph by Bang Chau).