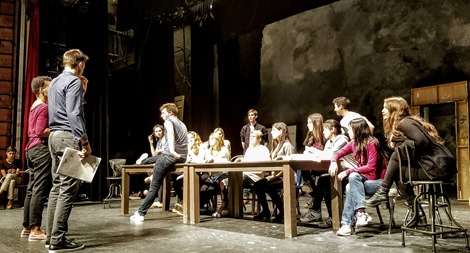 WHEN: Thursday, Friday and Saturday, November 17, 18, 19, 7:30 PM
WHERE: The Collins-Tall Auditorium, 19 Columbus Drive, Tenafly, NJ TICKETS: $25 premium reserved; $15 rear reserved.
To purchase tickets visit: www.tenaflytheatre.com or buy at the door. For more information or to request an interview, email: sahncooper@tenafly.k12.nj.us

The Tenafly High School is proud to present Rent as this year’s fall musical – a legendary show which has been cast and directed by Tenafly High School Theater/Speech Director Samuel Ahn-Cooper and Music Director Jim Millar, who have long dreamed of showcasing this compelling story with themes that continue to haunt audiences over the decades.

Loosely based on Puccini's La Boheme, Rent tells the story of a group of impoverished young artists struggling to survive and create a life for themselves in New York City's East Village, under the shadow of AIDS. The famous rock musical, with music and lyrics by Jonathan Larson, was first presented as a workshop at the New York Theatre Workshop and went on to win critical acclaim with a Pulitzer Prize, a Tony Award for Best Musical and other awards long after Larson’s tragic death from an aortic tear the night before the show’s Off-Broadway premiere. Rent enjoyed a 12-year run on Broadway, closing in 2008, and is the eleventh-longest-running Broadway show. Its success led to several national tours, numerous foreign productions, and was adapted into a motion picture featuring many of the original cast members.

“It has been a life-long dream of mine to direct this show,” says Samuel Ahn-Cooper. “There is so much love, heart-ache and passion behind the music and the story still resonates today as much as ever. I am extremely happy to give these students the chance to be part of such an important part of musical theater history.”