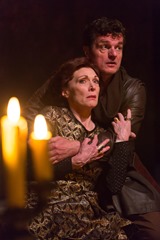 Power—wanting it, getting it—can be a corrosive, caustic force. Just witness the recent brawling presidential campaign here in the United States. For less psychic and social wear and tear, however, head on down to Red Bank where James Goldman’s medieval study of royal succession, The Lion in Winter, variously described as a historic drama, domestic comedy, sit-com and melodrama, is getting the royal treatment at Two River Theater through December 4. (Left: Dee Hoty as Eleanor and Michael Cumpsty as Henry)

Fluidly and sure-handedly directed by Tyne Rafaeli, The Lion in Winter recounts the (supposed) the Christmas Court held by King Henry II of England in 1183. There, Henry plans to announce his successor to the throne. He wants his youngest son John to take over, but his wife Eleanor of Aquitaine (whom he has imprisoned in Salisbury Castle for the past 16 years) favors son Richard. Along with their fussing and feuding sons Richard, Geoffrey and John; Henry’s mistress, the much younger French princess Alais; and her brother King Philip of France, the various schemers spend a memorable holiday, picking the scabs off old wounds and inflicting new ones in the battle for succession. Political maneuvering collides with personal and domestic intrigues to produce a situation fraught with often-vicious wit, naked malice, even love (old and new)—in short, a family holiday that is as deliciously entertaining as thought-provoking.

The action unfolds on a beautiful, very functional set designed by Kirsten Robinson and atmospherically lit by Jennifer Tipton; hanging tapestries, some chairs and a table, a curtained bed and a dun-colored cellar wall suggest the varying locations without detracting from our main focus, the talented actors and the very compelling characters they portray.

Of the septet, Michael Cumpsty (Henry) and Dee Hoty (Eleanor) command our attention whenever they are onstage (and sometimes when they’re not). Cumpsty’s 50-year-old king—considered an old man at that time—is a master manipulator, hiding his malice behind an expansive smile and handsome face, making him even more evil-looking than Peter O’Toole’s Henry in the 1968 film version. Even when delivering his sharpest digs, he’s one sexy dude, as evidenced by his wife’s admission that, despite his maltreatment, she still loves him! He’s tender toward Alais, but perfectly willing to marry her off to one of his sons—if only to best Eleanor. A superb comedic and dramatic actor, Cumpsty appears to enjoy his role as Alpha Male and craven puppet master.

Hoty’s Eleanor is his antagonist, and a worthy one at that. She may have been imprisoned, but the experience hasn’t turned her into a wraith; she’s all spit and vinegar in her interactions with her estranged husband, to whom she’s been wed for 31 years! That this combat partly involves the Aquitaine, Eleanor’s considerable land holding in France, merely adds fire to the already boiling pot. Of all the characters, other than the innocent Alais, Hoty commands the audience’s sympathy. She may not have been the best mother, but she is genuinely hurt by Henry’s barbs although she’s not above taunting him with the idea that she may have slept with his father! Henry calls her a Gorgon; sometimes she is! 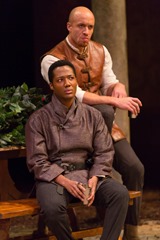 “The greedy little trinity of king, king, king,” i.e., the princes, brattily portrayed by KeiLyn Durrel Jones (Richard the Lionheart, the eldest), Hubert Point-Du Jour (the middle son Geoffrey) and Noah Averbach-Katz (the baby John) are the victims in this royal wrangling. While none of them (save perhaps Geoffrey, who suffers from severe parental neglect) is especially sympathetic, the actors convincingly convey the sibling rivalry that enables Henry to make trouble. Jones’ Richard, puffed up with arrogance, strides across the stage like he owns it, while Du Jour’s Geoffrey slinks around, shifting his allegiance and conniving with the French king, and Averbach-Katz’s awkwardly annoying John skips in circles while proclaiming that Daddy loves him best and blubbering when the others contradict him. Why neither parent especially likes these princes is glaringly evident even though they do take credit for their poor parenting. (Above: Hubert Point-Du Jour  as Geoffrey and KeiLyn Durrel Jones as Richard. 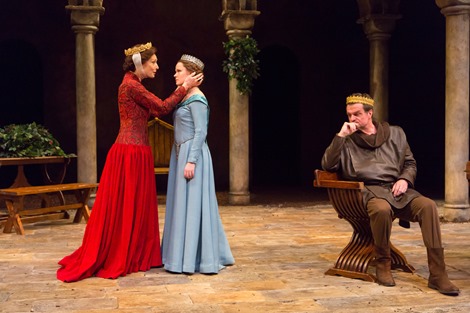 Madeleine Rogers (above, center, with Hoty and Cumpsty) is a luminous Alais, the collateral damage in this twisted tale. The young (23), beautiful French princess who has been raised by Eleanor and involved with Henry for the past seven years, is used as a pawn, with the king and queen cavalierly awarding her to whichever son is the designated heir. Rogers manages to hold her own in this battle of royal wills, her vulnerability masks a spine of steel as she manages to give back malice in kind. 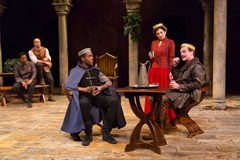 And Ronald Peet as the newly crowned Philip of France, is equally as wily, as befits a medieval monarch. He resists Henry’s treating him like a child, plays one brother against another and all three against Henry, and manages to credibly get back at Henry for his poor treatment of his father Louis, to whom Eleanor was once wed! If this all sounds like a soap opera plot, rest assured it is! (Above: Hubert Point-Du Jour, KeiLyn Durrel Jones, Ronald Peet, Dee Hoty and Michael Cumpsty.)

The medieval atmosphere is enhanced by Andrea Hood’s simple yet evocative costumes. Dressing Eleanor in a red gown at the outset marks her as a force majeure; Alais’s blue gown denotes her youth and relative innocence. Josh Schmidt’s sound design involves medieval music before and at intermission to further transport us from 21st-century New Jersey to 12th century-France.

Coming off a fight for the U.S. presidency might make theater audiences leery of more sturm-und-drang, but The Lion in Winter in the beautiful Rechnitz Theater, the perfect venue for this crisp, elegantly nasty production, is a must-see for the holiday season. It may not, at first glance, appear to be appropriate holiday fare, but you will be mightily entertained by the clever dialogue and universal themes that will have you talking on the ride home. After all, as Henry so wisely observes, “What family doesn’t have its ups and downs?”

The Lion in Winter will be performed at the Two River Theater Company, 21 Bridge Avenue, Red Bank, through December 4. For information, performance times and tickets, call the box office at 732.345.1400 or visit www.tworivertheater.org online.

All Photos by T. Charles Erickson.