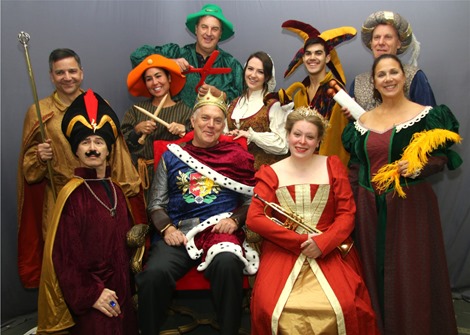 WHEN: November 26 through December 18, 7:30 pm on Fridays and 1:00 pm and 3:30 pm on Saturdays and Sundays.
WHERE:  Little Firehouse Theater, 298 Kinderkamack Road in Oradell
TICKETS: $14 for all performances and can be purchased online at www.bcplayers.org, by calling 201-261-4200 or by visiting the box office at 298 Kinderkamack Road in Oradell during regular box office hours. Visa, Master Card and American Express are accepted.
Those interested in Group Sales of 20 or more tickets can email groups@bcplayers.org or call the main number and press #6.

The Prince Street Players acclaimed version of this musical is designed specifically for young audiences ages 10 and under. Based on the Hans Christian Andersen tale, two con men wreak havoc at Wits End Palace when they present their emperor with a special gift. An exquisitely beautiful magic suit, it is invisible to all but the wisest of men. The dangers of vanity are hilariously addressed by an array of delightful characters, a dozen catchy tunes, inventive staging and imaginative, colorful costumes.

Lynne Lupfer of Tenafly, President of BCP, directs the musical. Her many main stage directorial credits include the successful staging of “Leading Ladies” earlier this year. “I chose Emperor”, Lupfer said, “because it has humor on all levels so parents can enjoy it as well as kids and I like its messages of honesty and standing up for yourself."

David Luke of Mahwah plays the Emperor. A versatile performer, David has been seen in numerous BCP productions, including roles in “A View From the Bridge”, “To Kill A Mockingbird”, “The Mouse That Roared”, “Man of LaMancha” and “My Favorite Wife”. Katie Lupfer of Tenafly is the kind, lovable Empress Carlotta the Least, and was recently seen in “Leading Ladies” and “Pinocchio” at BCP.

Richard Field of Cliffside Park takes on the role of Sinister the Prime Minister in the production. He has appeared in the theater’s productions of “A View From the Bridge” and “Guys and Dolls”. Dumont’s Matthew DeMarco, a Bergen Community College student, performs in his second BCP production as Chester The Court Jester. He was last seen in “Freckleface Strawberry the Musical”, as was Heather Mueger of Harrington Park, a Ramapo College student who plays the maid Verity.

Elaine D’Addezio of New Providence plays one of the two con men. As Stitch, she, together with Sew, played by Richard Dwyer of Bayonne, wreak havoc at the Wits End Palace. Dwyer is making his BCP debut while D’Addezio was previously seen on the BCP stage as Nam Jun in “Getting Away With Murder”.

Edie Orlando of Hillsdale portrays the stuffy Lady Winifred of Wardrobe, who is guardian of the Emperor’s wardrobe, in this her twelfth children’s show at BCP. The show’s producer, Andrew Whitney of Ramsey, also stars as Sir Ivan of Inventory. At BCP he has appeared in “Leading Ladies”, “To Kill A Mockingbird”, “August: Osage County”, “45 Seconds From Broadway” and “The Mouse That Roared”.

Richard Ciero of Oradell plays the comical Royal Herald, who proclaims all Court announcements. His theater credits include “Pinocchio” and “A View From the Bridge” at BCP.

• All patrons entering the theatre, including infants and small children, must have a ticket, even if the child shares a seat with a parent. A limited number of booster seats are available upon request and are provided at no charge.

• A new program is now available for qualified non-profit organizations to use one performance of each production as a fundraising event. The group will book the house at a deeply discounted price and then resell the tickets at a price of their choosing, with the difference in price kept by the group. The available date is the Thursday of each show’s final weekend.

• Parking is free at the Park Avenue municipal lot, across the street, one-half block north of the theatre.