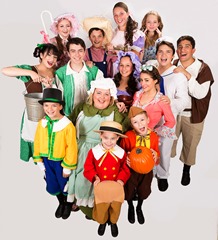 With their friends in trouble, the fairytale characters of Toyland are preparing for battle. M&M Stage Productions presents the charming holiday musical “Babes in Toyland” at Mercer County Community College’s (MCCC’s) Kelsey Theatre.

The theater is an official drop-off site for the Marine Corps Toys for Tots campaign and is accepting new, unwrapped toys now through Dec. 12. (There will be a special toy sale in the lobby during performances of “Babes” to give patrons a convenient way to purchase and donate on the spot.)

This musical by Victor Herbert brings to life various beloved characters from Mother Goose nursery rhymes, all of whom live in Toyland. It’s a wonderful place to call home, except that they must share their town with the wicked Barnaby, the original Grinch! Barnaby is intent on ruining the holidays for all by foreclosing on their homes and stealing their money. He also has his evil eyes set on marrying the adorable Contrary Mary by kidnapping her boyfriend, Tom Tom, the Piper’s son, to get him out of the way. Family audiences will root for them all – Jack and Jill, Little Miss Muffet, Simple Simon, Little Boy Blue, Little Bo-Beep and many more – who will band together to protect their friends and their town.

Starring in “Babes” are: Amy Bessellieu of Lawrenceville as Hilda; Alexa Comeau of Princeton as Contrary Mary; Gina Drigant of Bensalem, Pa., as Widow Piper; Richard Kirschner of Belle Mead as the Toymaker; Michael Marrero as Alan, Barnaby’s nephew; Connor McDowell of Levittown, Pa., as Tom Tom; Marina McLaughlin of Columbus as Jane, Barnaby’s niece; Dan Mucha of Yardville as Roderigo; Ron SanGiovanni of Burlington as Gonzorgo; Hudson Waller of Kendall Park as Grumio; Joe Zedeny of East Windsor as Marmaduke; and John Zimmerman of Hamilton as Barnaby.

Also featured are Nicholas Benedetti of Ewing as Tommy Tucker; Sawyer Berness of Pennington as Peter Pumpkin Eater; Addison Blumberg of Margate as Curly Locks; Roman Engel of Hamilton as Simple Simon; Maya Karp of Marlboro as Red Riding Hood/Fairy; Dylan Katz of West Windsor as Boy Blue; Makenna Katz of West Windsor as Little Miss Muffet; Maddie Keelan of Hamilton as Bo Peep; Jack May of Millstone as Jack (of Jack and Jill); Isabella Papaccio of Hamilton as Jill (of Jack and Jill); Alexis Pulsinelli of Bordentown as Sally Waters; and Andrew Reiman of Yardville as Bobby Shafto.

The Kelsey Players present their annual performance of

Kelsey Theatre is wheelchair accessible, with free parking next to the theater. For a complete listing of adult and children’s events, visit the Kelsey website or call the box office for a brochure.