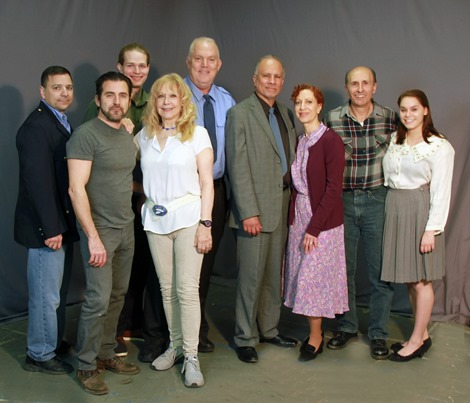 A VIEW FROM THE BRIDGE
by Arthur Miller

WHEN: through May 22; Fridays and Saturdays at 8 pm, and Sundays at 2 pm
WHERE: Little Firehouse Theatre at 298 Kinderkamack Road in Oradell
TICKETS:  $21 for Friday/Saturday performances and $17 for Sunday matinees, and can be purchased online at www.bcplayers.org, by calling 201-261-4200 or by visiting the box office at 298 Kinderkamack Road in Oradell during regular box office hours. Visa, Master Card, and American Express are accepted.
Those interested in Group Sales of 20 or more tickets can email groups@bcplayers.org or call the main number and press #6.

It’s the story of Brooklyn longshoreman Eddie Carbone (Andrew Lionetti of Westwood) and his personal turmoil as he grapples with his attraction to, some might say obsession with, his orphaned young niece Catherine (Sarah Mason of North Caldwell) who lives with him and his wife, Beatrice (Meg Renton of Ringwood). Taking a cue from ancient Greek drama, Miller creates the character of Mr. Alfieri (Ted Odell of Warwick, NY), a lawyer who serves as an on-stage narrator. The play gains momentum as Eddie’s initially fatherly feelings toward Catherine change. Tension mounts with the arrival of her cousins Marco (Anthony Ventola of Oradell) and Rodolpho (Thomas Hoesly of Wyckoff), who are illegal immigrants from Italy, especially when Rodolpho begin dating Catherine without Eddie’s permission. Others in the talented cast include Mike (Richard Field of Cliffside Park), Louis (Ron Siclari of Oradell), and the Immigration Officers (David Luke of Mahwah and Richard Ciero of Oradell).

At the heart of the play is the theme of justice. Standard, by-the-book American justice comes face-to-face with the old-fashioned Italian “we’ll handle it ourselves” brand. According to Director McElroy-Poquette, audiences will be made to both think and feel and are likely to leave the theater with their heads spinning.

The family connection off-stage is between veteran director Jackie McElroy-Poquette and the leading actor, Andrew Lionetti, who is her son-in law. (Her husband, Ray Poquette, is also there behind the scenes as the lighting designer.) According to Jackie, and contrary to any pre-conceptions we all share about mothers-in-law, their working relationship couldn’t be better. “Of course,” she says, “it helps that Andrew is as professional an actor as you’ll find in any community theater production.”

Parking is free at the Park Avenue municipal lot, across the street, one-half block north of the theater.

The Bergen County Players has grown tremendously from its roots as a small community theater when it was founded in 1932; today, nearly 300 volunteer members, working on and off stage, make possible the nine productions presented each season. The remaining Second Stage productions is An Evening of One Act Plays (June 4th and 5th).