“THE PIPES OF CHRISTMAS” CONCERTS RETURN FOR 17TH JOYOUS SEASON 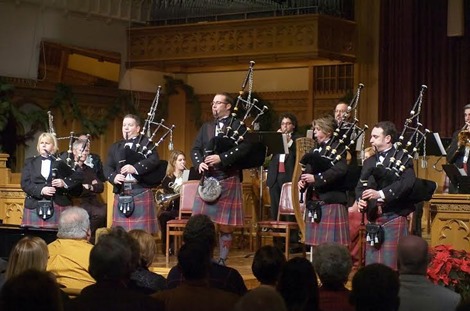 WHEN & WHERE: Saturday, December 19th, at the Madison Avenue Presbyterian Church, located at 921 Madison Avenue (at 73rd Street) with performances at 2PM and 7PM

WHEN & WHERE: Sunday, December 20th, at Central Presbyterian Church located at 70 Maple Street in Summit, NJ for 2PM and 7PM performances.

The Pipes of Christmas celebrates its 17th season with performances in New York and New Jersey.  This classic holiday concert like no other offers a unique blend of drums and pipes along with the harmonious sound of brass, strings, and percussion native to Scotland, Ireland, and Wales.

The Pipes of Christmas will honor late film composer James Horner, who composed over a 100 films and received two Academy Awards and two Golden Globe Awards over his brilliant career. His body of work includes score for ‘Braveheart,’ ‘Titanic,’ ‘A Beautiful Mind,’ and ‘Field of Dreams.’

To pay tribute to his legacy of bringing Celtic music to a broader audience, three ‘Braveheart’ cast members—Mhairi Calvey, James Robinson, and Andrew Weir—will reunite to perform in The Pipes of Christmas.

Glasgow-born actress Mhairi Calvey shot to stardom at the age of five, making her film debut playing the role of Young Murron, in 'Braveheart' and has now been casted in a breakout role to play famed Scottish heroine Flora MacDonald in ‘The Great Getaway’, a movie about Bonnie Prince Charlie, written and directed by Robbie Moffatt.

James Robinson is perhaps best known for his role as Young William Wallace in ‘Braveheart” is also a Glasgow native. The Glasgow native’s other film work includes ‘The Walk’ ‘Saxon.” Auditioned for the role of Anakin Skywalker in ‘Star Wars: Episode I - The Phantom Menace’ and was initially used for the original storyboards for the character. On television he has appeared in the Showtime series, ‘The Borgias.’ He recently toured the UK in a stage adaptation of the film, ‘Brassed Off.’

Andrew Weir hails from Ayr, Scotland. He appeared in ‘Braveheart’ as Young Hamish. Away from the stage and silver screen this versatile actor is a keen follower of Ayr Utd. Football Club and the Scotland National Team. He is also one of the founders of the highly successful company ‘3rd Degrees Burns,’ making him one of Scotland’s top interpreters of the immortal bard. His work in this field has been appreciated by audiences worldwide.

In addition to the Horner tribute, the concert will also feature the world premier of a new work composed by a music student of Edinburgh Napier University as part of the university’s Christmas Composition Contest which is sponsored by acclaimed Scottish writer Alexander McCall Smith author of the highly successful “No. 1 Ladies’ Detective Agency” series.

An experience that has become a tradition for many can be a special event for anyone. As cool weather arrives, tune into the holiday spirit and prepare to be inspired by the Pipes of Christmas.

Named one of New York City’s “Top Ten” holiday events, the concert is made possible by a generous gift from Edinburgh Napier University, Edinburgh, Scotland, and the Grand Summit Hotel in Summit, NJ.

The Pipes of Christmas not only invokes the true holiday spirit, it also instills the true meaning of giving this time of year.  Proceeds from the concert support an extensive international music scholarship program that includes annual gifts to students in the United States, Scotland and Canada.

Concert highlights will also be screened with holiday performances scheduled to be televised via cable to 11 NJ towns on December 24th-26th, 2015 and streamed online.  To find out more, please visit www.pipesofchristmas.com on the web and facebook.com/ThePipesofChristmas