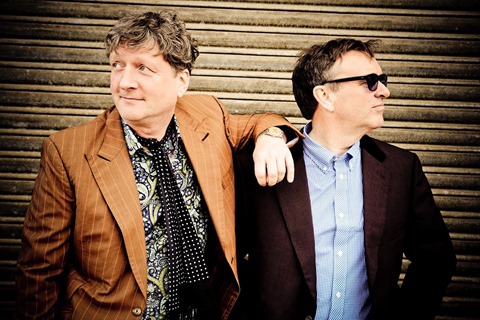 For the first time in the U.S. in almost 20 years, Squeeze's Chris Difford and Glenn Tilbrook will be heading out on the road as a duo. "The At Odds Couple" tour will see them present their songs and story in a unique way. The tour celebrates their enduring music and partnership.

Chris Difford's lyrics and Glenn Tilbrook's music have prevailed through turbulent times over the past four decades, from the ever-changing musical landscape to their own internal reshuffles and an acrimonious break-up. "The At Odds Couple" will see Glenn and Chris reflecting on their careers, as part of Squeeze and as solo artists, sharing not only the music but also giving an insight in to what makes the two of them tick as a partnership.

In addition to performing a selection of hits, including "Up The Junction" and "Cool For Cats," Chris and Glenn will be dusting down some previously unrecorded songs that were written together back in the band's infancy but never recorded, as well as playing tracks from their solo careers. The duo has also been working on new Squeeze material - released in the U.S. November 13 - which will no doubt creep into the set list.

Difford's ying to Tilbrook's yang, Glenn's chalk to Chris's cheese, "The At Odds Couple" will be in the spotlight and under the microscope like never before as these two talents of the music industry come together to present a unique two-man show.