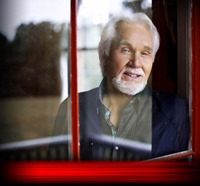 Known for his instantly identifiable sweetly raspy vocals and an extraordinary ability to vividly inhabit each song he performs, Rogers has sold more than 120 million records worldwide and recorded more than 65 albums during his storied 52 years in show business. He is one of very few artists who have enjoyed successful careers in such a variety of genres – jazz, folk, rock, country and pop.

His long list of timeless classics includes an impressive 24 #1 hits – “The Gambler,” “Lady,” “Lucille,” “She Believes in Me,” “Islands in the Stream,” and “We’ve Got Tonight” among them. Two of Rogers’ albums, The Gambler and Kenny, are featured in the About.com poll of "The 200 Most Influential Country Albums Ever”, and his Greatest Hits album has sold over 24 million copies worldwide to date. He is the RIAA’s 8th best-selling male artist of all time with 1 Diamond album, 19 Platinum albums and 31 Gold albums.

Rogers has received hundreds of awards for his music and charity work, including three Grammys, 11 People's Choice Awards, 18 American Music Awards, eight Academy of Country Music awards and five Country Music Association awards. Remaining a popular entertainer around the world, Rogers, voted the "Favorite Singer of All-Time" in a 1986 joint poll by readers of both USA Today and People, plans to do one more tour before retiring from the road.

Linda Davis
Labeled a ‘song stylist’, Davis’ unique ability to interpret a song has made her one of Nashville's favorite vocalists. Her music collaboration with Reba McEntire became a #1 hit and earn both artists several awards including a Grammy for Best Country Vocal Collaboration.

Through the years, Davis has played to sold-out crowds with the likes of Garth Brooks, George Strait, Reba McEntire and Kenny Rogers just to name a few. In 2009, Linda was inducted into the Texas Country Music Hall of Fame.