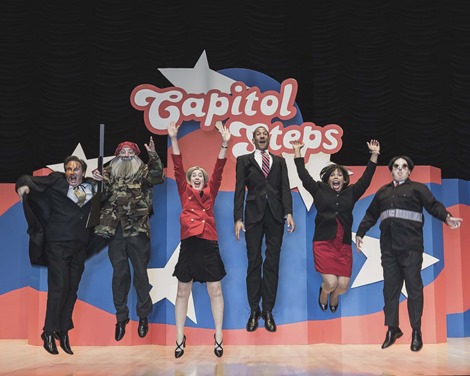 THE CAPITOL STEPS: MOCK THE VOTE

The Capitol Steps began in 1981 at a Christmas party in the office of former Senator Charles Percy. Like most things in Congress, they never knew when to stop. Over the past thirty-four years, the Capitol Steps have recorded thirty-five albums, and appeared on “Good Morning America,” the “Today Show,” “10/20,” “Entertainment Tonight,” “Nightline,” CNN’s “Inside Politics,” and dozens of time son National Public Radio’s “All Things Considered.” For the past twenty years, they’ve produced specials for public radio and have been featured in three national specials for public television. They’ve performed for five U.S. Presidents. The Capitol Steps: They Put the “Mock” In Democracy!

The Capitol Steps fully admit that they have an odd way of looking at the news. When they hear of a scandal, they don’t think about whether it’s good or bad for the country. Their two questions are: (1) Is it funny? And (2) what Rhymes with it? Next thing you know, someone wakes up screaming with an idea for a parody. After a few fast and furious e-mails, the song is hurled in front of a live audience by a brave performer. The performers have often worked on Capitol Hill. The current cast has, at one time or another infested the offices of eleven US senators and seven Members of the House of Representatives.