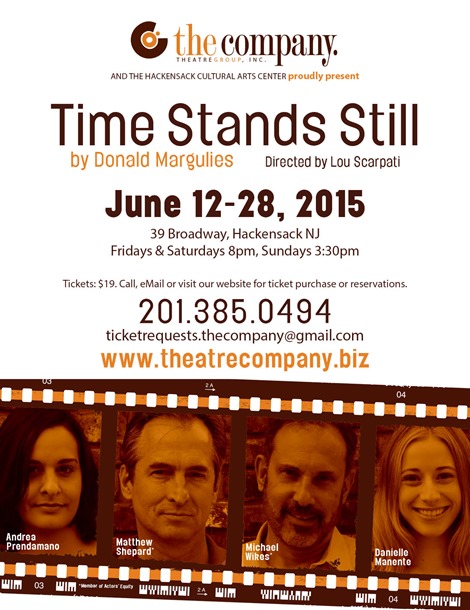 WHEN: June 12 – 18; Fridays and Saturdays at 8 PM, Sundays at 3 PM
WHERE: Hackensack Cultural Arts Center, 39 Broadway, Hackensack
TICKETS: $19 at the door.
Tickets online: www.theatrecompany.biz/tickets
Tickets by E-mail: ticketrequets.thecompany@gmail.com
For more information, please visit The Company Theatre Group’s website  and facebook page
Children under 4 are not permitted into the theatre.
Teens and kids under 18 not permitted without parent.

This highly entertaining & thought-provoking play focuses on how two people—used to the dangerous, addictive and sexy life of war time journalism—now have to come to grips with returning home injured and living a more “normal” life.

At the open, photographer Sarah has been seriously injured in a roadside bombing. Her partner James, a foreign correspondent, had left a few weeks earlier when the stress and horrors of what he was reporting finally became too much for him.

Time Stands Still premiered in February 2009 at the Geffen Playhouse in Los Angeles and moved to the Samuel J. Friedman Theatre on Broadway in January 2010.

Please note: Adult language and adult themes. No one under 18 will be permitted without an adult.

The Company Theatre Group, Inc was founded in the summer of 2007 in Lou Scapati’s apartment by a number of like-minded actors, directors, and writers. In the beginning there was not a lot of formal organization, and we were known simply as The Company.

In May of 2008, The Company produced its first show, Chapter Two, at the Hackensack Cultural Arts Center. Then, in January of 2009, The Company became The Company Theatre Group, Inc. and received its non-profit status later in July of that year. In Jan 2012, we began celebrating the beginning of our 4th year of operation. In May of 2012, we produced our first show with an equity contract. And, now, as we continue to grow, we open our Sept production of Barefoot in the Park with two equity actors under contract

Then, as now, we draw inspiration from the acclaimed Group Theatre.  And like the Group Theatre, The Company Theatre Group believes in creating authentic human behavior on stage—“Life in Fiction” we like to call it.  Our goal is create an environment and an experience where each audience member can feel like a fly on the wall, watching the lives of real people unfold and sometimes unravel right before their eyes.  We also work hard to give thought provoking entertainment to everyone who comes to our productions.