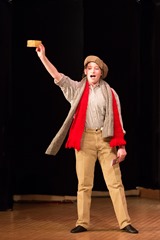 WHEN: Mon-Fri, July 8-24, 9:30 AM-4:30 PM; students can be bussed to the JCC at 3:20 pm to swim in the outdoor pool to conclude the day.
WHERE: bergenPAC, 30 N. Van Brunt St., Englewood
TUITION: $995 for JCC members, $1,195 nonmembers. Extended day is available at an additional cost.
Interview/audition required. Price includes two tickets to the NYC performance.
For more information, call JCC School of Performing Arts Director Deb Roberts at 201.408.1492 or droberts@jccotp.org. 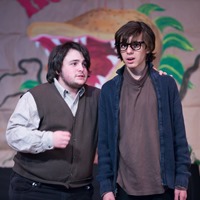 Children and teens with a passion for theater can enjoy the opportunity to develop professional skills in singing, acting, comedy and movement. This cabaret-style, three-week performance intensive will feature favorite numbers from Broadway musicals, comedy skits, short scenes and popular rock songs as well as new pieces. This program will culminate with a performance in a New York City venue on July 23, followed by an additional performance in BergenPAC’s Cabaret Space on July 24.

The program will be taught by Joseph A. Baker, a highly successful Broadway music director/accompanist, who has performed in Wicked, Shrek, The Lion King, Little Shop of Horrors and many other shows. He will be assisted by well-known Broadway guest instructors, who will help participants attain professional skill development in singing, acting, comedy and movement.

Baker will also be joined by three young accomplished stars, who will share their talents, insights and enthusiasm for the Broadway stage to inspire and coach their students peers: Henry Hodges, an actor, voice actor and singer, who starred as Chip in Beauty and the Beast, Jeremy Potts in the original Broadway cast of Chitty Chitty Bang Bang and as Michael Banks in the original Broadway cast of Mary Poppins. Rozi Baker, a stage and screen actress who made her Broadway debut at age 10 in Shrek, the Musical, Jane Banks in Mary Poppins at the New Amsterdam Theatre in Times Square; and the standby for the role of Young Bonnie in Bonnie and Clyde. And Emily Rosenfeld, is a young actor, voice actor, singer and dancer, who made her Broadway debut as Molly in the revival of Annie.