REVIEW: “MUCH ADO ABOUT NOTHING” A SHINY CHRISTMAS BAUBLE AT SHAKESPEARE THEATRE OF NEW JERSEY 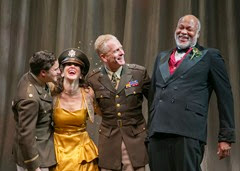 The productions I've seen of Much Ado About Nothing are too numerous to count. They've been set in 16th century Italy, Jacobean England, the 18th century, 1900s America, somewhere in the 1930s, the New Jersey Shore during the 1950s, and even California in 2013! This time out, the Shakespeare Theatre of New Jersey has transposed Shakespeare's rollicking comedy to 1940s wartime America at Christmastime in a superb production that not only captures the sentiment of the holiday but is a testament to the dialogue's sounding contemporary and fresh, almost 400 years after Shakespeare wrote it!

This often-produced, much beloved, sophisticated comedy has at its center the attractive Beatrice and Benedick, who engage in a “merry war” of sharp wits, determined to convince themselves, and each other, that they’re not in love. In contrast are the two young lovers Hero and Claudio, who are visibly smitten from the moment we first see them. Despite the foul deeds and desperate measures of a rather dopey subplot—which Shakespeare cribbed from an Italian story—the two couples are ultimately joined in holy matrimony and all ends well. [Top L-R: Claudio (Charles Pasternak), Hero (Susan Maris), Don Pedro (John Hickok), and Leonato (Raphael Nash Thompson) revel in their merry plot to trick Beatrice and Benedick into admitting their true feelings. Photo: © Jerry Dalia] 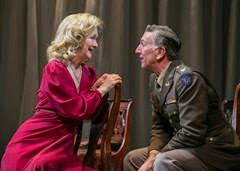 What makes this production of Much Ado About Nothing so different is director Scott Wentworth's casting of himself and his real-life wife Marion Adler as the two lovers. A bit longer in the tooth than the actors usually playing these roles, these two bring a world weariness to the play that lifts the love story from one of two high-spirited young folks engaged in a romantic battle to one of two very wary, much-disappointed people approaching middle age without having found a soul mate. Without detracting from the silliness onstage, their verbal sparring has a more poignant, sadder edge to it. (Above: Marion Adler as Beatrice and Scott Wentworth as Benedick confess their love to each other.)

Every character, except for Hero and her waiting women, is played by an older actor. This suits Raphael Nash Thompson as a dignified, avuncular Leonato, count of Messina, father to Hero and uncle to Beatrice; and John Hickock as Don Pedro, mentor to Claudio and commanding officer of the troops returning from war to layover in Messina before embarking for home. Michael Steward Allen is a taciturn, wily Don John, Pedro's bastard brother, eager to make mischief for his brother and the men who follow him. My one complaint is that his villainy is a bit muted in relation to the mayhem it causes. And Charles Pasternak’s Claudio, while a bit old to be a young lover, convincingly plays a man so inexperienced around women who is thus easily duped into believing the worst about his bride-to-be, played with a wholesome winsomeness by a lovely Susan Maris.

Wentworth is a superb Benedick, with his sonorous voice and hound-dog face that wears his emotions for all to see. He is hilarious as he proclaims his desire to be a bachelor all his life, only to be caught unaware by Cupid's arrow when he learns that Beatrice loves him! That this occurs after he has eavesdropped from behind a Christmas tree that he moves to follow Leonato, Don Pedro and Claudio's "conversation" only adds to the merriment. Marion Adler's Beatrice has been wounded by Benedick on his way to war, so she goes out after him verbally before he can get under her skin. She may have been hurt, but Adler's Beatrice is not brittle; she is a warm-blooded, intelligent woman deserving of a man worthy of her! But even when she and Benedick have proclaimed their mutual love, Adler lets us know that even a married Beatrice will be a force to be reckoned with. 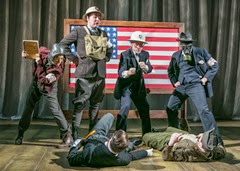 Jeffrey M. Bender returns as STNJ's premier clown in the role of Dogberry, the leader of the Count's Watch. Dressed as an Air Raid warden, Bender mangles the English language (uttering malapropisms more than 125 years before there was a Mrs. Malaprop), misconstrues others' judgments of him (he preens when Leonato calls him tedious) and stumbles on the plot set in motion by the villain Don John to besmirch Hero's moral character and hurt Don Pedro's protegé Claudio. He's abetted in this lunacy by Conrad McCarty as his fusty sidekick Verges and the Watch as played by James Costello, Rachael Fox and Victoria Nassif. [Above: No mischief gets past The Watch, led by Dogberry (center left, Jeffrey M. Bender) and Verges (center right, Conan McCarty)]

In supporting roles, Andy Paterson is a calm, collected Father Francis who saves the Hero-Claudio relationship with ingenuity and sympathy. Austin Blunk as a callow, stupid Borachio, and Travis Johnson as an easily convinced Conrad carry out to Don John's plot. And Rachael Fox and Victoria Nassif do double duty as Hero's servants Margaret and Ursula, respectively, lending some youthful fun to the Christmas festivities.

By the way, the company's dramaturg remarks in the program that the play was called, in Shakespeare's time, Much Ado About Noting—a play on pronunciation—pointing out that there are many ways that the ado is caused by noting, meaning "to observe, to watch." It is also notable to mention that an ingenious framing device (no spoiler) enriches the decision to set the play in 1940s wartime.

Scott Wentworth and the STNJ team have given us a remarkable Christmas present in their iteration of Much Ado About Nothing. This play never gets old for me, so even if you've already seen it, take your spouse, significant other, parents, teenagers and/or friends to see it this holiday season. Give the gift of theater. Here, on the F.M. Kirby Shakespeare Theatre stage there is a great ado about something!

Much Ado About Nothing will be performed through December 28 at the Shakespeare Theatre of New Jersey, 36 Madison Avenue (on the campus of Drew University) in Madison. For information and tickets, call 973.408.5600 or visit www.ShakespeareNJ.org  online.