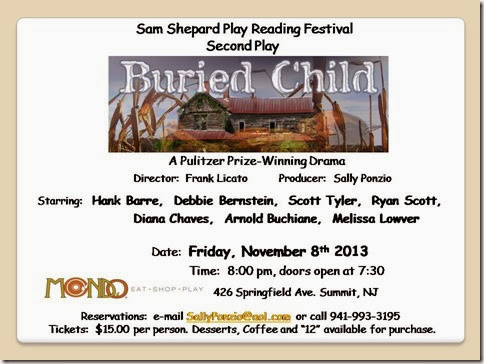 WHEN: Friday, November 8th at 8:00 PM
WHERE: Mondo, 426 Springfield Ave., downtown Summit
TICKETS: $15
For further information and tickets please contact SallyPonzio@aol.com or call Sally at 941.993.3195. Seating is limited, we look forward to seeing you.

The cast includes Summit residents and actors Arnold Buchiane and Melissa Lowver. Other local actors who have also performed at The Summit Playhouse and/or The Chatham Community Players include Hank Barre, Debbie Bernstein, Scott Tyler, Ryan Scott and Diana Chaves.

In his 1979 Pulitzer Prize-winning family drama, Buried Child, Sam Shepard takes a macabre look at one American Midwestern family with a very dark secret. Shepard's intention was to create a narrative which communicated and reflected the frustrations of American people but at the same time was engaging and entertaining. The postmodern style which Shepard uses incorporates surrealism and symbolism in the realistic framework of a family drama. This platform allows for engaging visceral theatre. Shepard is able to create images in the imaginations of people through the use of surrealism and symbolism, evoke and harness the experiences of his audience through its postmodern nature and keep the audience comfortable in the trappings of realism.

The Sam Shepard Play Reading Series will be directed by Frank Licato. Frank Licato (www.frankLicato.com) has been working for over 30 years as an actor, director, producer and teacher. He was nominated for an Obie award for his performance in “Deathwatch” by Jean Genet, which the New York Times called a ‘performance on another plane’.  He acted at the American Repertory Theatre, the Delaware Theatre Company and the Boston Shakespeare Company.  He has appeared on TV in Third Watch, Sidney Lumet’s 100 Centre Street with Alan Arkin and with Frank Sinatra in First Deadly Sin.   As a director he won a Perry Award for his production of “Grapes of Wrath” at the Chatham Playhouse and his productions of “The Late Christopher Bean” and “The Best Man” received 13 Perry nominations. He received an Applause Award from the New Jersey Theatre Alliance and has worked extensively throughout the state.

The next Sam Shepard play reading performance date is December 13th – Curse of the Starving Class. Local actors will be considered for all play readings.