READING OF PLAY ABOUT IRAQ IN OCEAN GROVE THIS SUNDAY 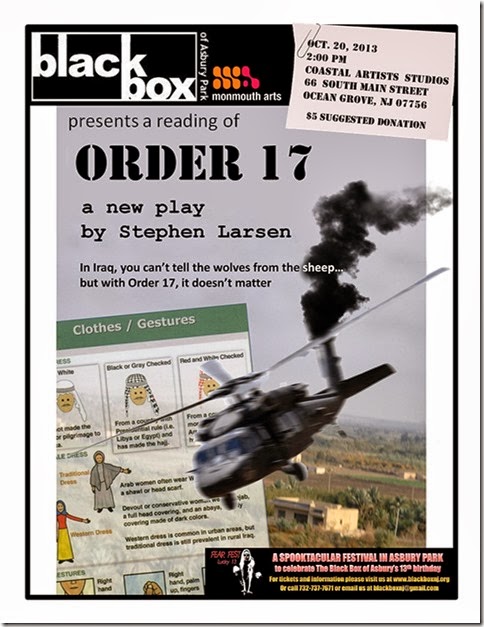 ORDER 17 follows two men, an Army Civilian Journalist and a former-Special-Forces-Operator-turned-Security-Contractor, as they come face-to-face with Iraqis whose lives have been forever impacted by the War and the Insurgency.  They find out that, in Iraq, you can’t tell the wolves from the sheep.  But, thanks to Order 17, it doesn’t matter.

In November 2004, a year-and-a-half after President Bush gave a speech on an aircraft carrier with a huge “Mission Accomplished” banner hanging behind him, Iraq was still in the middle of a bloody insurgency.  “When I deployed to Iraq a year-and-a-half later, as a civilian journalist for the Army, we came under fire at every location we visited.  Mortar attacks, car bombs, machine guns, and IEDs were a daily occurrence,” playwright Larsen says.  “I felt like Yossarian in Joseph Heller’s novel Catch 22.  He discovers that ‘Catch 22’ means that those who had power could do whatever they wanted to—it didn’t have to make sense.  We were supposed to be there to help Iraqis—yet we destroyed their infrastructure.”

But it was the toll that the war took on the lives of average Iraqi citizens that most struck Larsen. “I don’t think we have heard enough about how the war in Iraq affected Iraqis.  Our sanctions, prior to the war – and the war itself—were aimed at Saddam and the high-ranking Ba’athists.  But for the most part, Saddam’s elite still lived like princes, while average Iraqis suffered greatly, their families devastated by the war itself, and then increasingly caught up in the middle of sectarian violence.”  Most of the Iraqis he came into contact with refused to make eye contact and seemed angry. “Seeing the devastation in their country, I could not blame them.  Had our roles been reversed, I know I would be quite angry. I wanted to write about how the war affected these people.”

The play’s title refers to an actual Order issued by the U.S.-led Coalition Provisional Authority in 2004 that exempts “contractors” from subjection to Iraqi law, regulation, or legal process, regardless of the contractor’s illegal actions.  Order 17 came to Larsen’s attention in 2007, when Civilian Security Contractors employed by Blackwater killed Iraqi citizens in Baghdad, after mistaking them for insurgents. “According to Order 17, these Blackwater employees were immune from prosecution in Iraqi courts, because they were Civilian Contractors performing acts related to the terms and conditions of their contract,” said Larsen.  “Yet when Blackwater was sued in 2005 by families of Blackwater employees who were ambushed and killed in Fallujah, Blackwater’s primary argument was that they were immune from liability because they were part of the ‘Total Force’ of the Military.  They were saying that – dependent on the situation – they were Civilian Contractors, or they were Military.  How could they be both? This was Catch 22 in real-life, alive and thriving in Iraq.”

ORDER 17 is part of the New Play Initiative at the Black Box. “We run a monthly playwriting workshop,” said Alexis Kozak, who moderates the group. “Stephen is an extraordinarily talented writer who does a lot of research, because he insists on getting the details right.  He has an ability to put characters in morally precarious situations that attack you both cerebrally and emotionally.  With ORDER 17, he has written a troubling play that questions the implied morality of Americans around the world.”