Lionized as a worthy successor to Shakespeare, this 19th century writer's ruggedly written stories about real people with real feelings and aspirations—first serialized in a monthly magazine and later published as complete books—sold thousands of copies, making her the most popular author you never heard of. Her name is Mary Ann Evans, although she is more commonly known by her pseudonym, George Eliot. That this unconventional and very talented woman had to hide her identity in order to express her ideas and feelings says a great deal about the role and status of females in mid-nineteenth century Great Britain and is the topic of an original play by Cathy Tempelsman, A Most Dangerous Woman, now receiving its world premiere in an impressive production at the Shakespeare Theatre of New Jersey in Madison. 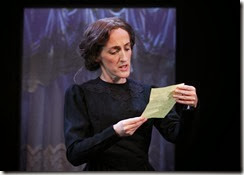 With her (very) plain looks and outsized intellect, 32-year-old Mary Ann Evans seemed destined to follow the path of a spinster, acting as a tutor to her married sister's children or residing under her overbearing brother's thumb. But this brave woman set out for London, alone, where she secured a position anonymously editing the failing radical Westminster Review, returning it to publishing prominence. Spurned by a suitor, her future is uncertain, until she meets writer George Henry Lewes, a married man unable to divorce his wife, falls in love and, with his avid encouragement, begins to write and publish under an assumed name—thus doubly flaunting convention and becoming a truly dangerous woman.

The Shakespeare Theatre of New Jersey is not a venue for original works, so the decision to produce A Most Dangerous Woman is momentous. Just as Evans/Eliot created real characters in works that had recognizable truth (unlike the authors of romantic novels popular at the time), so has Cathy Tempelsman created a protagonist who lives and breathes with a sympathetic urgency and determination. The relationship between Evans/Eliot and Lewes poses great risks for her more than for him ("a woman who runs off with a married man is a fallen woman"), making her decision to live with him and call herself Mrs. Lewes while writing and publishing under a male name especially courageous. She is a woman who practices her beliefs that art ought to be about everyday life, that art is the nearest thing to life, that fiction should be a moving and truthful work of art.

Under Richard Maltby, Jr.'s deft direction, Aedin Moloney (above)delivers a fierce performance as Mary Ann Evans (or, as she prefers to be called, Marian). Diminutive in stature, Moloney conveys her characters outsized intellect and desire to break societal bonds with a ferociousness that is both attractive and sympathetic. She is never obnoxious to the audience although many of the play's personages find her off-putting—and don't hesitate to say so in no uncertain terms. Rob Krakovski is especially odious as her older brother Isaac, who finally disowns her as a result of her scandalous life. Moloney may look as plain as her character's portraits, but her entire body (and expressive face) emits an attractive aura, a frustrated desire to express her feelings in a time when it is unseemly to do so. We desperately want her to succeed. 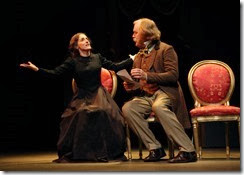 As George Henry Lewes, the ever-curious science writer whose success is overshadowed by his partner, Ames Adamson (left, with Moloney) turns in a terrific portrayal of a man every woman would want for a mate! As written, he's at times too good to be true, but he's exceptionally supportive of Evans' efforts, going so far as to sublimate his own desire for success to promote hers. A bear of a man, Adamson is delightful as he literally sweeps Moloney off her feet and, even when he crosses her by comparing her to other female writers of the time, is quick to salve her hurt feelings at the cost of his own professional values. The chemistry between the two actors was quite convincing; we are so glad that this "plucky" woman has found happiness with such a supportive mate. 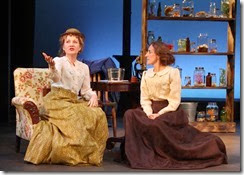 Other actors turn in outstanding performances in a variety of roles. Sheffield Chastain is odious as Evans' dastardly suitor Herbert Spencer; John Little is the very professional, yet compassionate, publisher John Blackwood; Deanne Lorette is the sprightly, more feminine (but equally as radical) painter/journalist Barbara Bodichon (left in photo to right) who also encourages Evans; and Andy Paterson is the self-important phrenologist George Combe. Devin Norik does a fine job with a variety of roles (male and female), from office clerk to Evans' stepson. Meg Kiley Smith appears from time to time as various characters in Evans/Eliot's novels and stories. 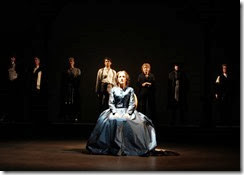 Top-notch production values make this play especially memorable. Tempelsman has used the convention of having Eliot's characters enact snippets of scenes from her work, often in silhouette behind the main action (left). At one point, the voices get to be too much for Eliot, and we understand just how difficult creation (and swimming against the tide) can be. Nicholas Dorr's unfussy set suggests a variety of venues with a change of drapery, the addition or subtraction of a piece of furniture or two, or a change in the lighting designed by Tony Galaska. Hugh Hanson's costumes are especially appropriate to the characters; Eliot's drab, serviceable dresses imply a woman more interested in the style of her intellect than the cut of her clothing; Lewes' camel-colored suit contrasts with the sober attire of most male characters, making him stand out in appearance as well as temperament. Bodichon's more feminine attire conveys another aspect of femininity; her more conventional look hides a passionate nature.

George Eliot's novels aren't read much anymore, but Mary Ann Evans' story of having to hide her true nature and identity resonates today, given the current sea change in society's attitudes toward gays and the place of women. For Evans, assuming a male identity permitted her to escape the stereotype of women authors' writing romantic bits of fluff and to avoid having her work judged by virtue of her gender or of her scandalous life. Thus, coming out of the authorial closet in the 1850s was a dangerous, but ultimately courageous, decision. When she announces to publisher Blackwood, "I refuse to hide any longer; I will have a name," we want to get up and cheer for this woman who refuses to write "happy" endings until women's lives actually change.

In A Most Dangerous Woman, Cathy Tempelsman has created a character and story relevant to today, just as George Eliot wanted her work to hold up a mirror to life and to show the transformative power of art. Thinking about the play makes me want to read The Mill on the Floss and Middlemarch again. Perhaps you'll feel the same way.

A Most Dangerous Woman will be performed at the F.M. Kirby Shakespeare Theatre on the campus of Drew University in Madison through October 12. For performance information and tickets, call the box office at 973.408.5600 or visit www.ShakespeareNJ.org  online.