Rogers and Hart. Rogers and Hammerstein. Lerner and Lowe. Kander and Ebb. Bowen and Bell. Bowen and Bell? Who? Well, the last two are the authors of [title of show], a delightful and fascinating 100-minute glimpse into the creative process currently gracing the Westminster Arts Center stage in Bloomfield where 4th Wall Theater is performing it for two weekends only (through October 6).

Just as Mickey Rooney's exhortation to Judy Garland, "Let's put on a show," got their friends' creative juices flowing, a notice soliciting musical plays for a new festival unleashes the creativity in Hunter Bell and Jeff Bowen, two "Two Nobodies in New York." Their goal: to write a completely original musical in three weeks, submit it to the festival and, hopefully, get it produced, if not on Broadway, at least Off.

How do the two—one a composer, the other a writer, both of whom get by on catering and temp jobs—avoid duplicating what has been seen before? Well, they plan to write a musical about two guys writing a musical, using real conversation and enlisting the help of two actresses to help bring the project to fruition.

The result: a play about the theater, and an insightful one, at that. As they create the songs, Jeff and Hunter address cogent questions that have plagued playwrights for centuries: Are we writing for art? Is art a springboard for fame? Hunter especially wants "substance, not fluff," while Jeff finds himself anxiously facing a notebook's blank page when his computer dies and he hasn't saved what he has been working on. 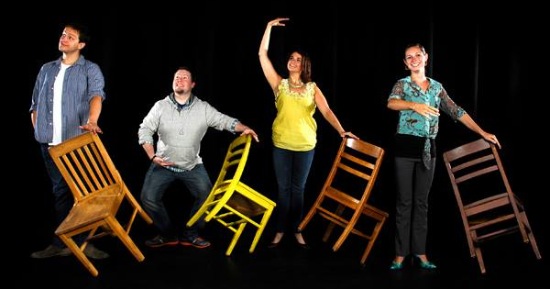 The two engaging, potty-mouthed twenty-somethings are distinct characters, and John Wilkening (Jeff, left)) and Jordan Gulick (Hunter, second from left) convey the differences in their personalities very well. So convincing is their relationship that we never doubt that they have known each other for years. Pudgy Hunter is a television fiend, watching anything and everything while string-bean Jeff is not above correcting his partner's grammar and word usage whenever he feels an error has been made. Adorable Heidi (Alexis Field, second from right), a bubbly actress who has already appeared on Broadway (albeit in ensemble/understudy roles) and sophisticated, world-weary Susan (Marie Nicole, right), a self-described "corporate whore" who has stopped auditioning, are recruited to help; the girls sing a very funny "What Kind of Girl Is She" as each sizes up the other.

To gain inspiration, the company examines old playbills ("Monkeys and Playbills), writes a "Tony Award Song: and fantasizes about being "Part of It All"—the "all" meaning success. To do this, they have to kill the vampire of doubt attacking their ideas (a very funny number entitled "Die, Vampire, Die"). Even filling out the festival application becomes a song!

Success brings its own set of challenges (no, the show isn't over when the play is accepted). After a short Off-Broadway run, the quartet dreams of Broadway. Will success hijack the page? Should they change anything in the script? Should they get known actors (Sutton Foster, for instance) to play the role? They even recall their childhood aspirations to be on the stage (Alexis Field as Heidi does a boffo job with this number; haven't we all put on plays in the back yard?). Finally, eschewing compromise, the company sings about being "Nine People's Favorite Thing (Instead of a Hundred People's Ninth Favorite Thing)" and the rest is history. I mean, we are watching the fruits of their labors, right?

[title of show] really was presented by Bridge Club Productions at the 2004 New York Musical Theatre Festival, went on to a production at The Vineyard Theatre and opened on Broadway in July 2008. George Street Playhouse produced it a couple of years back, so that the guys succeeded is no surprise. But with four chairs, a keyboard accompanist (a very funny Larry, played by David Maglione) and a flat-screen monitor on the set's back wall, we are transported to a creative lair wherein a hit musical is coming into being! It's quite a fascinating process, and an entertaining one, at that.

Jasmine Vogue Pai is to be commended for her set; Nicholas Marmo for his lighting; Nicholas von Hagel for his sound and media design; and Gregory G. Allen for his sure-handed direction.

If you love theater as much as I do and are interested in the creative process, get on over to the Westminster Arts Center, 449 Franklin Street, Bloomfield, where four talented 4th Wall actors are performing [title of show] for just one more weekend. For information and tickets, call the box office at 973.566.9255 or visit online at www.4thwalltheatre.org.

LISTEN TO A TRAILER HERE