GERSHWIN RETURNS TO MILLBURN THIS THURSDAY WITH THE CHATHAM COMMUNITY BAND

For the third consecutive year, the Chatham Community Band, under the direction of Brian Conti, will perform seasonal marches, patriotic and Americana selections.

The concert will feature a performance of George Gershwin’s Rhapsody in Blue by guest pianist Mark Yolleck. This will be a repeat of the successful performance of this work by Mr. Yolleck at the Chatham Band’s Annual Spring Concert on May 19th in Chatham.

Rhapsody in Blue is a 1924 work by George Gershwin for solo piano and jazz band, which combines elements of classical music with jazz-influenced effects.  Commissioned by bandleader Paul Whiteman and orchestrated by Ferde Grofé, the work received its premiere on February 12, 1924, in Aeolian Hall, New York, by Whiteman and his band, with Gershwin playing the piano. Rhapsody in Blue established Gershwin's reputation as a serious composer and has since become one of the most popular of all American concert works. 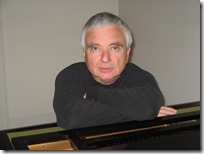 Now retired from a 30-year career as an educator, Montclair resident Mark Yolleck was Supervisor of Music and Visual Art in the School District of South Orange/Maplewood, but is no stranger when it comes to performing in Millburn. He is a soloist and current member of the Millburn-based Metropolitan Orchestra of New Jersey and performed a very successful fundraiser-recital for the orchestra at the Millburn Library on January 6th. It featured piano works by Mozart, Chopin, Liszt, Kodály, Taub and others. Yolleck played Slaughter on Tenth Avenue as part of a jazz trio during the orchestra’s spring 2012 concert, "Richard Rodgers and Friends." A year earlier, he soloed on I got Rhythm Variations during the orchestra’s spring 2011 concert, "Gershwin & Friends." He also performs with the Plainfield Symphony, the Essex County Summer Players, and the New Sussex Symphony. Yolleck refers to himself as "a cantankerous old coot who likes to play the piano."