REVIEW: “THE PLAYBOY OF THE WESTERN WORLD” @ THE SHAKESPEARE THEATRE OF NEW JERSEY

When John Millington Synge's earthy comedy, The Playboy of the Western World, opened in Dublin in 1907, crowds rioted, outraged by what they saw as an insult to the Irish character, their speech, their customs. With its salty, yet poetic, language and outrageous characters, the play raises questions about identity, the role of romantic dreams in the presence of stifling poverty and the fickleness of human affections. With Synge, modern Irish drama was born.

Similar to their production last year of Trelawny of the Wells, the Shakespeare Theatre of New Jersey brings us an energetic and polished production of this little known, rarely seen play to inaugurate its 51st season. For a tad over two hours, we are transported to a pub ("shebeen") in a small village in County Mayo, on the wild west coast of Ireland—a land of potato farmers, fishermen, poverty and a paucity of excitement. 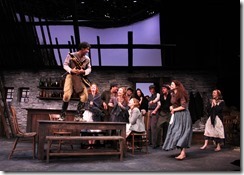 The humdrum life in this dreary village, where nothing ever happens and everyone knows everyone and his/her business, is upended by the sudden arrival of Christopher ("Christy") Mahon, a handsome albeit dirty and disheveled young man from the south who has been on the run after killing his abusive father in a violent altercation 11 days before. Captivated by the bold novelty of Christy's deeds and his skill at telling his story—complete with gory details—the townsfolk lionize him (publican Mike Flaherty says, "A daring fellow is the jewel of the world"), and the village women, including Flaherty's daughter/barmaid, Pegeen Mike, shower him with flirtatious attention, building up his male ego. Christy further cements their adoration by winning a donkey race and spouting poetic Blarney—hence, the appellation bestowed upon him by one of his most ardent admirers, the conniving Widow Quin: the Playboy of the Western World! The unexpected arrival of Christy's father in pursuit of his would-be murderer son turns the plot on its head, throwing cold water on Christy's tales and allowing Synge to examine the capriciousness of adulation and glory as the crowd turns on its "hero," leading to his ultimate and sudden departure.

As a slice of Irish village life a century ago, The Shakespeare Theatre of New Jersey's production succeeds quite well. I qualify the compliment with the word "quite" because the thick brogues and speed of delivery make a great deal of the dialogue incomprehensible. I overheard audience members complaining that they could not understand much of what was being said. Paul Mullins, whose fine directorial skill is evident in the play's pacing and staging and fine performances, employed Stephen Gabis as a dialect coach; from what I can tell, the actors' pronunciations are authentic, but they might have been less deep and broad and, thus, more suitable for American ears. 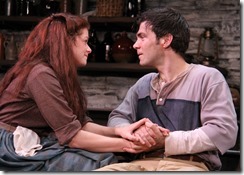 That said, the actors' performances are extraordinary. The leads, Izzy Steele as Pegeen Mike and Michael A. Newcomer as Christy (right), are appealing and convey great chemistry between the lovers. Steele is every bit the saucy, if somewhat tough, barmaid with a heart of gold. She ably puts her weak, quivering scarecrow of a suitor Shawn Keogh (played with delicious timidity by James Russell (below, right, with Michael Sullivan as Flaherty) in his place, yet is extremely susceptible to Christy's poetic patter and falls for him—hard. Newcomer vacillates between being the browbeaten son, unloved by his father or the 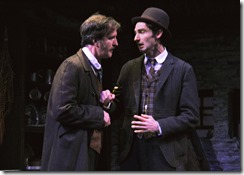 women of his village, to the preening, rather arrogant swain brought to life by all the attention, masculine and feminine, he receives from the townsfolk. He delivers Christy's lyrical speeches mellifluously; indeed, he won the heart of every woman in the audience in a wink! That he manages to use the confidence he's gained by being celebrated as "the playboy of the western world" is evident in the final scene; it's quite a transformation from the beaten-down weakling who turns up in the first act. 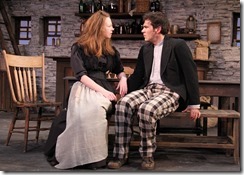 As the manipulative Widow Quin (right with Michael Newcomer), Emma O'Donnell's antics convey the humor and tragedy of village life. Just watch her eyes as she listens to what is going on around her; we can almost see the wheels in her head turning as she schemes to her benefit. Not yet an old woman, O'Donnell's widow is in search of a mate (and a servant!) in a village without prospects. The arrival of a healthy young man raises—and dashes—her hopes for success. And STNJ veteran Edmond Genest as Old Mahon steals the show every time he appears. Sly, if a bit daft, Genest's Mahon is like a cat with nine lives; just as we think he's croaked, he reappears! Genest wrings great humor from this decrepit old man's quest for his murderer; just comparing his and Christy's account of their relationship makes us wonder which one is telling the truth!

Michael Daly and Patrick Toon are superb as Jimmy and Philly, the garrulous barflies with an opinion on everything, especially Pegeen Mike's love life; Matt Sullivan is equally as fine as publican Michael James Flaherty, perpetually drunk and absent from his pub so he can attend one wake after another. The red-headed village girls, Madeline Fendrick, Megan Sass, Elaine Stenson and Sarah Quigley are delightful as they flirt with Christy and flit around the pub. 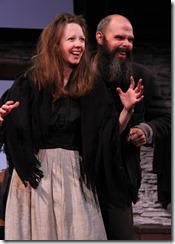 And kudos to Director Mullins who has staged a very entertaining and funny race scene without a trace of either a donkey or rider, by having Widow Quin, Old Mahon and the barflies react to the exciting finish facing the audience as though watching the race through the pub windows (left, Emma O’Donnell and Patrick Toon react to the race.)

Brittany Vasta has designed a set that is the embodiment of an Irish shebeen, and Michael Giannitti's lighting effectively shows the changes of time. Candida Nichols' costumes really transport us through time and space to a 1907 Irish village.

The Shakespeare Theatre of New Jersey continues to "educate" as well as entertain its audiences by presenting plays of various periods, some of which are encountered only in a college textbook nowadays. The Playboy of the Western World may appear to be a play about a particular time, place and people, but its themes transcend the local color aspects to become universal. Above all, Synge's writing about Irish peasants with a skeptical eye, made him Ireland's first modern resident dramatist. Thanks go to The Shakespeare Theatre of New Jersey for introducing him to us today. Now, about those Irish accents...

The Playboy of the Western World will be performed through June 23 at the F.M. Kirby Shakespeare Theatre on the campus of Drew University, 36 Madison Avenue, Madison. For information and tickets (and a schedule of their Know the Show and post-performance symposia), call the box office at 973.408.5600 or visit www.ShakespeareNJ.org.

Photos by Gerry Goodstein, The Shakespeare Theatre of New Jersey.