REVIEW: NONSENSE OF “NUNSENSE II” TAKES OVER THE BICKFORD THEATRE THIS JUNE

Since he introduced a bunch of zany nuns in Nunsense in 1985, playwright Dan Goggin has gone on to write what amounts to a veritable franchise of "nun" plays—none of which I have ever seen! So it was as a "virgin" that I went to the Bickford Theatre on Thursday afternoon to catch a performance of Nunsense II: The Second Coming, which is actually a sequel to last year's production of Nunsense. 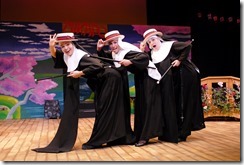 I spent a very entertaining and pleasant hour and forty minutes with the Little Sisters of Hoboken (the "Little Hobos," as director Eric Hafen called them in his introductory remarks). The nuns ostensibly are presenting a concert (on the set of Mt. St. Helen's Middle School’s performance of "that Japanese play," The Mikado) to raise burial funds for four sisters who, six weeks before, died of botulism poisoning from tainted vichyssoise prepared by Sister Julia, the convent cook. While various numbers featuring solo singing routines, madcap dance numbers and stand-up comedy (complete with audience participation) are being performed, a wild subplot unfolds, involving the attempted kidnapping of Sister Mary Amnesia by Franciscan nuns who want to get their hands on the fortune she has won from the Publisher's Clearing House! (Above L-R: Kristen Michelle, Amanda Yachechak, Geraldine Leer)

The nuns themselves are a motley crew. In her previous life, the Mother Reverend Mary Regina was a circus performer; the novice Sister Mary Leo wants to be the first nun prima ballerina; Sister Robert Anne is a streetwise former actress from Brooklyn; Sister Mary Hubert unwillingly plays Tonto to the Mother Reverend's Lone Ranger, and Sister Mary Amnesia, well, she's a bit dim and childlike, having been hit on the head by a falling crucifix. 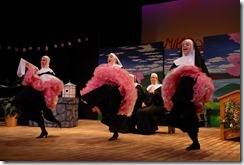 Reprising the roles they played last year is a quintet of very talented actresses. They ably and energetically perform a program of varied musical styles including a ballet on roller skates, a country number with a puppet, a rap, a soft shoe with hats and canes, a can-can dance and a rock and roll song—complete with an Elvis Presley impersonation! The audience even gets to play a spirited game of Bingo ("the next best thing to heaven," according to Sister Mary Amnesia). (Above L-R: Amanda Yachechak,, Katie Mott, Kristen Michelle) 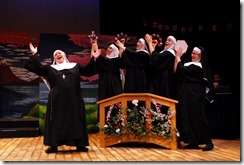 Gwendolyn F. Jones (far left) is an imperious, no-nonsense Mother Superior; her wildly competitive second in command, Sister Hubert, is portrayed by Geraldine Leer, who doesn't hesitate to contradict or undermine her boss. The two team up in a very funny scene where they get tipsy and wonder "What Would Elvis Do?" to solve their problem with the Franciscans. Katie Mott as a wisecracking Sister Robert, is a nun who knows her worth ("I've Got Pizzazz," she sings) and has a way with "habit humor." As the novice Sister Leo, Amanda Yachechak is quite agile on roller skates, and her wide-eyed innocence makes the double entendres she trades with Sister Hubert ("The Biggest Ain't the Best") all the funnier! As Sister Amnesia, Kristen Michelle works the hardest, whether it's performing a terrific routine with a ventriloquist's dummy, conducting a lively game of bingo, telling jokes, or joining Sisters Robert, Leo and Hubert in "A Convent Song" set to the tune of "Oh, dear, what can the matter be?" all to the audience's delight. The entire cast is to be commended for their vocal talent and ability to execute Laurie Piro's lively choreography. Best of all, accompanied on the piano by (Father) Dan Rufolo, they appear to be having the time of their lives. (Above L-R: Gwendolyn F. Jones, Amanda Yachechak, Katie Mott, Kristen Michelle, Geraldine Leer)

Director Eric Hafen keeps this zaniness humming along at a natural pace—not too rushed, not too slow, but just right! Julia Colicchio's set design looks like a middle school production on purpose; Danielle Pietrowski has assembled a myriad of props from priests' chasubles to cowboy hats to straw boaters.

If you enjoyed the Bickford Theatre's previous production of Nunsense, you won't want to miss Nunsense II: The Second Coming. If you have never before encountered the Little Hobos, this would be a grand introduction to the wacky sisters. While it may not be high art, Nunsense II is pure entertainment with a snarky religious twist. These nuns may be nothing like you ever imagined or knew, but you don't have to be Catholic to enjoy the fun. Forget the troubles of the world for a while, and give yourself up to the Little Sisters of Hoboken for lots of laughs!

Nunsense II: The Second Coming will be performed at the Bickford Theatre in the Morris Museum through June 23. For performance times and tickets, call the box office at 973.971.3706 or visit www.morrismuseum.org/general-info-theater.