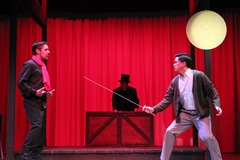 Even before the figurative curtain at the Chatham Community Playhouse rises on the current production of The Fantasticks, the stage is set for magic. Kudos go to director Patrick Horan for casting Michael Healy, a member of the Society of American Magicians and the International Brotherhood of Magicians (in addition to his day job as assistant principal of Columbia High School in South Orange!), to perform astonishing tricks with ropes and metal rings, aided by two people he has picked from the audience. Add to that Joe DeVico's choice of jazz versions of the play's melodies, and by the time the play begins, we have been seduced to accept its quirky dramatic conventions and fairytale story, which the Chatham Community Players perform with professional élan! (Above L-R: Salvador Navarro as El Gallo duel with Jason Pumarada as Matt as Michael Healy as the Mute looks on.)

Unless you have been living under a rock (or were born after 1980), you are probably aware that The Fantasticks, music by Harvey Schmidt and book and lyrics by Tom Jones (not the Welsh crooner), opened in a tiny Greenwich Village venue in 1960 where it went on to run for 42 years—making it the world's longest running musical! After it closed in 2002, The Fantasticks was revived in 2006 and continues to be performed Off-Broadway, to the delight of theatergoers and their children! 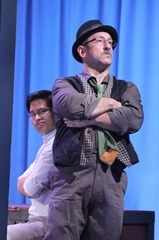 Well, you don't have to cross the Hudson River to experience this little gem of a show—just travel to suburban Chatham where you can park for free and the ticket prices won't break your bank account. There, on a sparse but imaginatively decorated set (designed by Roy Pancirov and atmospherically lit by Richard Hennessy), director Horan's cast of eight talented actors performs a play based on The Romancers by the Frenchman Edmond Rostand (with echoes of Romeo and Juliet and A Midsummer Night's Dream and Donizetti's L'Elisir d'Amore) about two neighboring fathers who trick their children, Luisa and Matt, into falling in love by pretending to feud. The fathers hire traveling actors to stage a mock abduction, so Matt can heroically "save" Luisa, thus ending the supposed feud. When the children discover the deception, they reject the arranged love match and go their separate ways to gain disillusioning experiences of the real world, seen in parallel fantasy sequences. They return to each other bruised, but enlightened, and renew their vows with more maturity. (Above: Jason Pumarada as Matt with Glen D. Post as his father Hucklebee)

The musical aspect of the play involve charming melodies (one, "Try to Remember," became a big Top 40 hit for Ed Ames) warbled by beautiful voices and accompanied by piano played by Horan and a harp strummed by Merynda Adams (on opening night) and Francis Duffy (I assume they alternate performances); the tinkling sounds of the harp are evocative, especially during the rain scene. 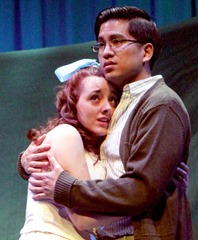 As the lovers, Luisa and Matt, Danielle C. Pennisi and Jason Pumarada (left) are adorable, she with a sparkling soprano and he with a winning nerdiness (and a good voice too). Howard Fischer as Luisa's father Amos Bellomy and Glen D. Post as Matt's dad Hucklebee are adept at delineating their characters; they have great fun extolling their preferences for raising vegetables instead of children ("Plant a Radish"). Aforementioned Michael Healy is a fine Wall, what with his deadpan expression and lumbering gait, but his magic is again on display providing rain, blood and snow so necessary to the setting. It's ingenious! "Stage managing" the proceedings is the mysterious gypsy El Gallo, gallantly and seductively played by the very handsome Salvador Navarro; while his voice may not be as deep as Ed Ames', it grew in intensity and amplification as the evening progressed, and he always had control of the stage whenever he was involved. 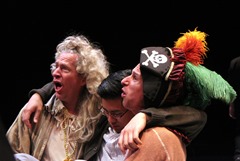 Lest the story grow too saccharine, Schwartz and Jones have provided comic relief in the persons of the magnificent David Cantor and the nimble (and rubbery) Chip Prestera (right, with Pumarada between them). With lots of inside theatrical jokes, the two chew up the scenery in huge bites, much to the audience's delight. They don't really have much to do in the story's advancement, but they sure are hilarious.

Beverly Wand is to be commended for her costumes (and some creative tricks), along with Tish Lum and Michael Healy for props, furniture and set decoration. Andrea Sickler's scenic painting adds to the enchantment.

Little black box theaters are perfect for little musicals like The Fantasticks. The audience sits so close as to feel involved in the story (indeed, the actor sometimes take seats in the audience). And just watching a bare stage be transformed before our very eyes reinforces the magic of the theater. Steve Ruskin’s fight choreography makes sure no one gets hurt while it conveys the feeling of combat.

As the cast exhorts us to "Try to Remember" a time when "you were a tender and callow fellow," you will leave the Chatham Community Playhouse humming the score and will recall the inventive staging long afterward. I have seen this play about a dozen times, but each time it's different, either because of the staging or because I have grown older. So even if you've seen it before, grab someone who hasn't and head on over to North Passaic Avenue in Chatham to initiate them and to remind yourself of a time when "life was green and grain was yellow”—a far simpler time than this.

The Fantasticks will be performed through May 18 at the Chatham Community Playhouse, 23 N. Passaic Avenue, Chatham. Performances are Fridays and Saturdays at 8 PM and Sundays at 2 PM. For information and tickets, call 973.635.7363 or visit www.chathamplayers.org.