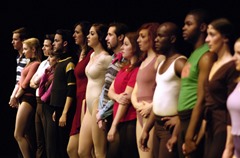 The enduring appeal of A Chorus Line has as much to do with Michael Bennett's inspired choreography and Marvin Hamlisch's music as with the raw emotions and intriguing stories of the 16 young dancers auditioning for a spot in the chorus of a Broadway musical show.

I have seen the show—which debuted in 1975 and went on to become the longest-running Broadway musical in history (until it was eclipsed by Cats in 1997)—twice on Broadway, once at the Paper Mill Playhouse, on screen and in a local community theater production, but I can say unequivocally that the Barn Theatre's current production, which closes their 85th season, is one of the finest I have ever experienced.

Perhaps the production's success lies in the size of the Barn Theatre; while not as intimate as a black-box venue, the mere six rows of seats that stretch from the stage mean that no one is more than 30 feet from the action. Add to that Jay Mills' superb direction of the 18 multi-talented principal performers, and you've got a recipe for "one singular sensation," to paraphrase the show's final number!

Unless you have been living under a rock for the past 38 years (or perhaps are too young to have ever encountered A Chorus Line), you are probably familiar with the "plot" of A Chorus Line. I use the word "plot" loosely, for what unfolds onstage (sans intermission) is more of a "situation" than a story. In the process of casting dancers for the chorus of a Broadway musical, director Zach and his assistant Laurie assemble a group of 17 dancers out of which he will select four boys and four girls for the final slots. His process is to have each dancer introduce him/herself and tell a bit about their pasts and their reasons for becoming a dancer, a process during which secrets and truths are revealed, many more shocking in 1975 than today, but all of them moving in their naked humanity.

It is difficult to single out any one performance, for this is truly an ensemble piece. The auditioning dancers start out as individuals, each one out for him/herself, but by the final number, they have blended into an ensemble, dressed alike, anonymous, a team. An accomplished director, choreographer and performer, Randy Accardi's portrayal of the director Zach is informed by his past. He's authoritative, yet empathetic (especially with Paul) and the hints of hurt at memories of his and Cassie's past show his vulnerability. Besides, he can really dance (dig those long legs)!

Cassie, the oldest and most experienced performer of the lot, is beautifully played by Kim Urba (right), whose great voice matches her dancing as she swirls around the stage in her solo, "The Music and the Mirror." Those mirrors multiply her image and make it appear as though a myriad of Cassies are dancing.

As the imperious Sheila, Chelsea Cicci-Wright (center left) is attitude personified, from her statuesque height and posture to the way she holds her head to the fish eye she gives other female dancers and Zach! Her dancing ability gives credence to her character's arrogance, yet her vulnerability is glimpsed in "At the Ballet," where she is supported by Larissa Reynolds (Maggie, above right) and Kimberly Jackson (Bebe, above left). Chelsea Varga gets laughs out of "Dance: Ten, Looks: Three," wherein she extols the value of plastic surgery to advance a dance care

er while revealing the premium the industry places on looks. And Allie Acquafredda as Diana Morales (right) conveys a dancer's resilience in two numbers, "Nothing" and "Kiss the Day Goodbye," the latter of which has become the show's rousing anthem to the difficult life of a dancer. Although she begins the latter song a bit softly, Acquafredda gains in power as the entire group joins in.

Other standouts include Brandon Arias (Mike), who sports a droll, yet authentic, New Yawk accent as he recounts stealing his sisters "shoes and tights and all" and heads of to dance class believing "I Can Do That"; Kelly 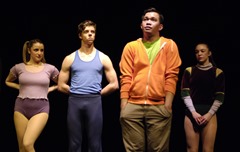 Ann Shera (Kristine) really sounds like she can't "Sing," but her husband Al (played by Darius Delk) gives her ample support. Samuel St. Juste is lithe and limber as Richie, the basketball player turned kindergarten teacher turned hoofer), and Michael Miguel (left, second from right) will break your heart as Paul, ashamed of his past but determined to make it on Broadway; the tears he sheds are natural and convincing and entirely in character. Samantha Kaplan (skinny, awkward red-haired Judy), Becky Nitka (sarcastic Connie), and Jeff Fiorello (dramatic Bobby) create characters who are unique. However, it is difficult to single out individual performers, because they all perform brilliantly as an ensemble in the six numbers featuring the entire cast.

Beau Kennedy has created a set, such as it is, to resemble the bare stage of a theater, complete with mirrors at the back suitable for dance rehearsal. Todd Mills' lighting focuses our attention on individual performers when necessary, and Jeff Knapp's sound design never blasts us out of the theater auditorium. The performers are not miked, which is a blessing for our ears! Lillian Miller, Barbara Mills and Jeffrey Fiorello have assembled costumes add to the verisimilitude of the situation; all are dressed in the kinds of duds assembled by struggling artists: a hodge-podge of tee shirts, leotards, sweaters and the like. Musical direction by Jack Bender and his musicians never overwhelm the singers, and Desirée Caro's choreography retains the flavor of Michael Bennett (and his colleague bob Avian) but makes it feel fresh.

As I have noted in previous reviews of this show, A Chorus Line is one of my favorite pieces of musical theater. I love plays that have to do with the theater (sometimes satirizing it, other times skewering the art with abandon), so this production was right up my alley. And no matter how many times I listen to the score on my iPod, there is nothing like hearing it live in accompaniment to inspired singing and dancing. But don't let that latter admiring comment fool you: the performers do both but they also act the words they are singing, making this more than a song and dance show.

This was my first visit to the Barn Theatre (can't figure out why I never went before), but it won't be my last. If their stellar production of A Chorus Line is any indication, it is a place we all should visit to get our regular dose of theater.

A Chorus Line will be performed at the Barn Theatre, 32 Skyline Drive, Montville (easy to get to from 287), through June 8th. Performances are Fridays and some Saturdays at 8 PM and Saturday and Sunday afternoons at 2 PM. For information and tickets, call 973.334.9320 or e-mail boxoffice@barntheatre.org. You can visit www.barntheatre.org  for more information on upcoming shows.