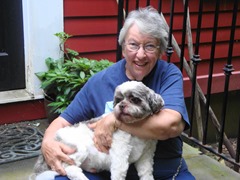 Anyone who has ever had the good fortune to be present at a birth knows how exciting that is. There is a sense of incredible wonder at watching the future unfold before your eyes.

Music lovers had the opportunity to experience that sense of wonder, if perhaps in a less visceral way, on Sunday, when the Baroque Orchestra of New Jersey presented the world premiere of The Concerto for Piano and Orchestra by Madison resident Paul Ziegler. The composer, who has been a soloist with the orchestra several times before, was featured at the piano.

Contemporary music—or even music composed nearly a century ago, still considered “modern”—is not necessarily to everyone’s taste. Sometimes jarring, occasionally mechanical, often soul-less, it can make one long for the crystalline intricacy of J.S. Bach, the joy of Mozart, the passion of Beethoven.

But once in a while, a miracle happens. And one happened on Sunday. The concerto was an absolute joy. Passionate and lyrical, it brought to mind disparate influences—Gershwin and Rachmaninoff most clearly, but it was nonetheless original. (If George Shearing gets to jam with Beethoven in heaven—well, who knows?)

As well as sections which gave Ziegler ample opportunity to demonstrate his virtuosity at the keyboard, the concerto had passages in which other instruments in the orchestra had the chance to shine. A distinctly rhythmic motif framed a gorgeous song for clarinet. The bassoons, horns and percussion also had their special moments.

We were intrigued by the interplay between Ziegler and conductor Robert W. Butts. Their interactions accomplished the beautiful unity between the solo piano and the orchestra, which, by the way, sounded superb. Ziegler has played Beethoven concerti with this orchestra and, last year, was the soloist in a marvelous performance of Gershwin’s Rhapsody in Blue.

This concerto, which Butts optimistically called Ziegler’s “first,” looking forward to subsequent compositions, has, the composer said, been in the works virtually since he began piano lessons at age 16. He recalled a theme coming to him in 1994, and remembered a dream in which he was playing his concerto “with a white-haired conductor.” Butts, whose hair is gray, provided impetus for his friend, telling Ziegler a year ago that he was scheduling the yet-to-be-completed concerto for a May premiere.

For a lover of music who tends to shy away from what is thought of as modernism, covering the Baroque Orchestra for the past few years has offered a revelation. Last year, hearing the orchestra present the premiere of Derwyn Holder’s Concerto for Guitar and Orchestra, we wrote the following: “the Guitar Concerto encouraged the conviction that there will be new music that someone might want to listen to.”

Then a week ago, we had the pleasure of reviewing Butts’s Concerto for Bassoon and Orchestra, another piece that gives one hope for the future of music. The Ziegler concerto was the proverbial icing on the cake. It was exciting to be present at its birth.

The concert opened with the charming ballet music from the first act of Verdi’s Aida, celebrating, as Butts pointed out, the bicentennial of Verdi’s birth. The piece was followed by Beethoven’s Symphony No. 1, which needs no reason to be played beyond being a joy to hear anytime.

The orchestra has a final orchestral concert this season on June 9, presenting a program featuring music by Schubert, Mozart and Haydn.