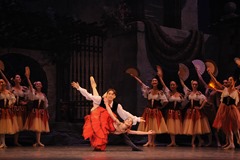 New Jersey Ballet premiered Don Quixote at MPAC in 2011, and the production immediately met with critical and audience acclaim. Within the month, it had made it to the Star-Ledger’s prestigious Top Ten dance events of the year.

This production is based on the 1900 version staged for the Bolshoi by Alexander Gorsky. Don Quixote is rich in Spanish color, flavor, and the laugh-out-loud humor of Cervantes’ masterpiece about an old knight, his squire, and their foray into the age of chivalry.

BEAUTY AND THE BEAST/
PETER AND THE WOLF