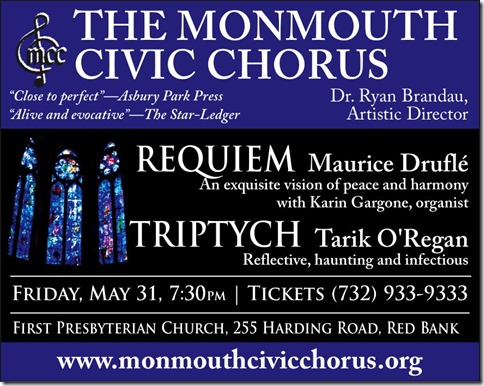 The Monmouth Civic Chorus has been called "close to perfect" (Asbury Park Press), "alive and evocative" (The Star-Ledger) and "exceptional" (Red Bank Green). The Chorus is the proud recipient of the 2008 ASCAP/Chorus America Alice Parker Award, and the 2010 Spinnaker Award for Arts and Culture from the Eastern Monmouth Area Chamber of Commerce.

Soprano Felicia Moore is quickly establishing herself as an exciting up-and-coming young dramatic voice. In 2013, Ms. Moore was a National Semi-Finalist in the Metropolitan National Council Auditions, and a winner of the George London Foundation Award. She recently made her solo debut at Carnegie Hall with Dr. Mark Shapiro and The Cecilia Chorus of New York. Her past operatic engagements include Mannes College the New School for Music in New York City, Nevada Opera in Reno, and the Spoleto Festival USA in Charleston, South Carolina. This summer, Ms. Moore will be participating in the Crested Butte Music Festival in Colorado as a Marcello Giordani Young Artist.

Organist Karin Gargone is Instructor of Music at Ocean County College in Toms River, and Music Associate of the Presbyterian Church of Toms River. As organist and director of music ministries, she has served several churches in Monmouth County, Indiana, California, Germany, Austria, and Switzerland. For twenty years she was Principal Accompanist for the Monmouth Civic Chorus. She has served the Educational Testing Service in Princeton six times as an Advanced Placement Music Theory Exam reader. She also serves on the Advisory Council of the Red Bank Chamber Music Society, Red Bank, NJ, and is a member of the Monmouth and Ocean County Chapters of the American Guild of Organists.