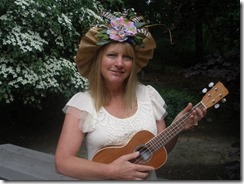 The community choir, now celebrating its grand 40th anniversary as a Morris County cultural mainstay, will present the rousing concert of Tin Pan Alley and Broadway favorites, featuring the music of Cole Porter, Richard Rodgers, George Gershwin and more, with a special tribute to the late Dave Brubeck.

In addition to the 80-voice chorus and a stage band, guest soloists will also include Denise Mihalik of Madison and Chris Frazier of Whippany. The MCS men's group, Express Male, will also perform.

Cedar Knolls resident soloist Roberta Foster (above) believes she began singing at birth and her friends and family will confirm that she hasn’t let up since. She has sung in everything from a madrigal group to a rock band, including more than 15 years with the Morris Choral Society. She has been fortunate to accompany the renowned community choir on all of their European tours as singer and self-appointed poet laureate and song parodist. Currently she sings alto in "Moderately Bright Four," Morris County’s premier a cappella quartet, performing throughout New Jersey at everything from coffeehouses to sports stadiums. Her other musical pursuits include playing ukulele and leading sing-alongs. A former elementary school teacher and a specialist in gifted education, Foster now teaches yoga and does private tutoring.

In honor of its 40th anniversary, the award-winning Morris Choral Society was recently cited in the Congressional Record by Rep. Rodney P. Frelinghuysen (R-Morris). Congressman Frelinghuysen, who has been an honorary MCS trustee and a long-time friend of the chorus wrote, "Congratulations on your many years of making our hearts sing." The citation traces the history of the chorus and the contributions the organization has made in the local area as well as memorable performances abroad.

During its forty years, the Morris Choral Society has performed alongside many famous musicians, including Judy Collins during her holiday performance at the Community Theatre and with Dave Brubeck. MCS has also sung Beethoven's Ninth Symphony under the celebrated Leon Hyman and joined with the Hanover Wind Symphony under the direction of Matthew Paterno of Parsippany.

MCS has always encouraged young people to pursue music education and perform onstage in regularly scheduled concerts. The chorus responds to requests by the Morristown Partnership, the Arts Council of the Morris Area, and the community at large during holidays, on special occasions for retired citizens, and for community fund-raisers.

Arlene Inglis of Morris Plains is the society's president, and R. Wayne Walters of Parsippany is the musical director. Over the past four decades, the chorus has sung classical pieces, pop, jazz, Broadway favorites and sacred music. In addition, the community chorus has debuted new music written by local composers. The chorus also encourages young musicians to fully appreciate and actively participate in artistic performance.
Funding for the Morris Choral Society is provided, in part, by the Arts Council of the Morris Area through the New Jersey State Council on the Arts, Department of State, Local Arts Grant Program.